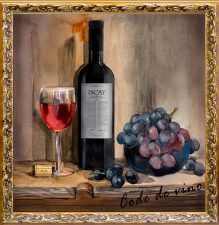 In 1996, the renowned Wine Enthusiast Magazine officially declared Trapiche vineyard the second largest in the world. The history of this vineyard began in 1883 on 625 acres of abandoned vines. Tiburcio Benegas, of Italian origin, bought this land, moved to Mendoza in 1865, and had achieved success as an influential banker by the age of 38. In 1886, don Tiburcio, serving as the mayor of Mendoza, purchased modern equipment and grape vines from France to produce high-quality wines in his winery. This can be considered the very start of Trapiche’s ascension (the ambitious and resourceful signor Benegas was also exporting French wine at this point).

Today, Trapiche is a major exporter of wines with a pristine reputation, supplying wine to over 80 countries all over the world. The company produces wine for all price segments of the market, using wine material not only from their own vineyards (area of over 1,000 ha) in Mendoza, but also supplied from more than 200 producers of the most prestigious regions in Argentina.

In 2005, the company’s chief winemaker Daniel Pi invited Michel Roland, a personality who needs no introduction, to perfect the brand’s quality. That was when the wine gained its «signature» status. One might call Trapiche the most cared after and talented child of the Trapiche wine house, both its business card and true face.

One of the most significant features of Trapiche is its concept of biodynamics, adopted in the cultivation process. It bans the use of chemical fertilizers and genetically modified products, preserves a well-balanced ecosystem and maintains natural vegetation cycles on the vines, based on lunar cycles and planetary rhythms.

Trapiche is also the mastermind behind a one-of-a-kind project called Single-Vineyard Malbec. Its point is to determine and expose the manifold and profound potential of Argentinian wine terroirs for the production of ultra-premium-class wines from Malbec. For this purpose, three Malbecs are selected from the 90 best wineries of Argentina. The names of the best producers appear on the wine labels.

In Argentina, the harvest of 2006 is considered equally successful as that of 2005. On the vintage charts, it earns a score of 90-94 points. Throughout the year below average temperatures prevailed, but consistently warm weather in March and April still allowed the grapes to ripen completely. As a result, the long ripening period was excellent for both the Malbec and Cabernet Sauvignon. Grapes for this wine are harvested manually. Fermentation and maceration take place in small concrete tanks for 25 days at temperatures of 23–25˚С, where natural apple and lactic fermentation is used in the process. Before mixing and bottling, the wine is aged for 18 months in new French barrels.

The Uco Valley is the highest region of Mendoza, and the local terroir is considered ideal for Malbec. Compared to the central regions of Mendoza, the difference in elevation of the slopes where the vineyards are located is larger here, from 2,600 to 4,900 meters above sea level. The difference in height creates individual climate characteristics of the terroirs at every level, bestowing a rich variety upon the wine material.

The Valley of Maipo is mostly located in the central part of Mendoza. The vineyards are situated at a height from 700 to 900 meters above sea level. The soil is alluvial, with the predominance of sand, pebbles and large amounts of lime. Merlot is cultivated in Maipo Valley.

Iscay is translated as «two» in the ancient language of the Incas. The nature of this wine reveals itself harmoniously through the synchronization of two grape varieties with different textures: the delicate, rounded Merlot with its bright bouquet, and harsh yet velvety Malbec with its powerful tannins.

The color of the wine is deep red and purple, ideally balanced, with prominent notes of prune, almonds, black fruits and spices. Ripe but delicate and rounded tannins leave a long pleasant aftertaste, with nuances of oak and dark chocolate, which demonstrate the numerous layers and depth of this wine.