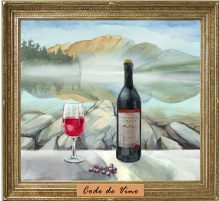 Winemaking in Canada… It’s amazing that grapes can be grown and wine can even be produced in this northern country. But oh, how well they manage to do it!

Hester Creek Block 3 Reserve Cabernet Franc comes from Okanagan valley, a special spot that might even be describe as «non-Canadian.»

This area is a kind of «pocket desert» in Canada, a place formed between the northern forests and deserts of the Great Basin, which influences both its diversity of geological and biological features. It is the deepest inner valley of British Columbia, descending to 275 meters above sea level at its lowest point, and rising to the level of the Alpine peaks at an altitude of 2,100 meters above sea level at its highest. The valley was born millions of years ago when ancient rocks, which once formed a continental shelf, came into surface, and are now known as the rocks on the eastern slope of the Okanagan. Volcanic activity and glaciers influenced the soil formation; the latter brought sand, mud and gravel, thus forming salt water lakes. This specific area is ideal for growing grapes, as the peak slopes protect the valley reliably from Pacific storms, cascading rain and cold temperatures. The winemakers here even specially wait for the coldest nights to harvest their grapes.

And in such an amazing place in 1968, the Hester Creek estate was founded to coincide with the first vines to be planted there. At that time, the Okanagan valley only featured a few vineyards, and there was a lot of space to choose from, so of course, the sunny eastern exposition south of Oliver was immediately selected as the best solution possible. Now this place is referred to as the Golden Mile.

Time seems to stop among the vines here, and immerses you in a long forgotten era of tranquility and regularity. Everything around this area breathes with confidence and strength, as do the wines created on winemaker Rob Summers’ estate. The soil, climate, and light of this spot all form an intangible magic for Rob Summers, helping to both create and develop magnificent wines that carry the winemaker’s admiration with the valley and vineyard’s potential. Here, the sophisticated becomes the accessible, and is appreciated by even the most discerning wine lovers. Hester Creek Block 3 Reserve Cabernet Franc wine tells a story about the unique characteristics of the area, the oldest Cabernet Franc vineyards and the soil minerality, which is as natural as can be.

The wine’s ruby color with soft brick shades and earthy taste with fruit and peppery accents, smoothed over with light notes of vanilla, unfolds in the glass. The rich taste and velvet sensations of a long aftertaste fills your body with contentment. This is a truly beautiful wine that has been evolving for several years.