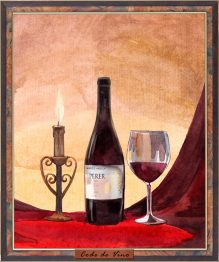 The mountainous region with steep slopes in northwestern Catalonia reveals the breathtaking vineyards of Priorat. Cartesian monks started growing grapes here when it was still the Garnacha variety, the seedlings of which had once been brought from Provence (in France this variety is called Grenache). Over time, another southern French variety of Carignan, called Cariñena or Mazuelo in Spain, has also been established in Priorat.

Priorat wines have always been famous as powerful and strong varieties, but due to the inaccessibility of these spots could never enjoy wide popularity, and were isolated until recently.

Priorat is a very small wine region, and only 1,500 hectares are taken up by vineyards here. Vineyards are terraced on the steep slopes at the level of 200-1,500 meters above sea level. This area has a unique microclimate associated with the proximity of the Mediterranean Sea and the influence of the Mediterranean winds. Burning hot daytime temperatures transition seamlessly into cold nights here.

At present, Priorat is famous for its old vines, which provide an extremely limited harvest due to their difficult soil and climatic conditions. Wines from these vines are powerful and ponderous, with a variety of flavors and aromas. And if the desired acidity is maintained in the berries, these wines can also evolve over the span of many years.

Bodegas Marco Abella wines carry the rich heritage of these lands, highland features, the uniqueness of soils and the local winemaking focus on organic and biodynamic methods of soil cultivation and vinification.

The Mediterranean wind leaves morning dew on the local vines with salty notes of the sea. And the old shale soils with their strata of coal and iron that formed more than 300 million years ago, referred to here as Licorella, glittering with mica, literally exfoliate in your hands and form the cracks, where the roots penetrate in search of water. Therefore, the vineyards of Marco Abella produced wines have an excellent acidity, wine body and unique aroma of graphite and red berries.

These distinct licorella soils are one of the attractions of Priorat, but of course, it isn’t just about the nature, but the people who cultivate them, who deserve recognition. The estate treats the land carefully, and the vineyards use organic approaches to soil cultivation and controlled harvest processes. The estate oenologist, señor Jose Luis Ruiz, manages both to obtain fully ripened berries with good sugar content and polyphenolic maturity, and to maintain the necessary level of acidity, which, in a hot climate, is indeed a lot of hard work and success that señor Ruiz embodies seamlessly in his wines.

Marco Abella El Perer 2012 has a complex taste due mainly to the influence of the soil’s macro and microelements, the natural characteristics of the variety and the tones introduced by maturation in oak barrels. All of these nuances perfectly coexist together, complementing and enhancing one other.

The main note in the taste is spice and candied fruit, where prunes are mixed with vanilla, nutmeg and other spices used in baking. And these bright tones formed in the wine from aging in a barrel unfold as candied cherry and plum notes, with notably fruity tones inherent in the Cariñena variety grown under the burning hot sun.