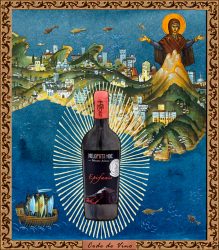 A wine blessed by the sun! This is how people talk about the wine of the Holy Mount of Athos.

Monasteries of the Holy Mount are best known for their organic wines, Epifanis being just one of them, as a joint effort of the monks of the St. Eustathius monastery in Mylopotamos. This particular location is nestled in the northeastern area of Greece on the Halkidiki Peninsula. Monasticism first grew its roots here over a thousand years ago. Today, 20 monasteries and 12 sketes of the Holy Mount form a single Orthodox community, which has preserved its autonomy from the outside world even up until today.

The vineyards in Mylopotamos skete were started over 1,000 years ago at the time of Saint Athanasius of Athos, who first started the winery, as well as an oil press farm for his freshly planted olive trees. Over the centuries, the reputation and quality of Mylopotamos skete wines have maintained their consistently high status. Now, the vineyards occupy 50,000 sq. m. in Mylopotamos and are located at an altitude of 100 meters above sea level. Here one can find Merlot, Limnio, Cabernet Sauvignon, Muscat of Alexandria and Assirtiko all growing in unison. The climatic conditions provide enough rainfall throughout the year, and together with the coastal climate and healthy number of sunny days, create the ideal conditions for obtaining the finest quality grapes.

Epifanis wine is crafted from two grape varieties: the indigenous Limnio, and the well-known Merlot type, the vines of which here are more than 15 years old. Limnio is an ancient variety cultivated in ancient Greece and even mentioned by the Greek philosophers of old. Nowadays, Limnio is not very widely spread; it is grown mainly in the north of Greece, and is referred to as Kalambaki on the island of Lemnos, the place of its origin and the basis for its name.

Mylopotamos skete monks use exclusively organic methods to cultivate the soil and grow the grapes. In places where the rush of city life and busy traffic are absent, the natural flows of the earth can continue on unimpeded.

The wort is fermented at a controlled temperature for 3 weeks, and is then matured in French barrels for 24 months.

Harvesting, vinification, maturation and bottling of the obtained wine are carried out at the skete winery under the strict control of Father Epiphanios.

The winemaker and winemaking philosophy

Father Epiphanios of Mylopotamos isn’t just one of the most famous monks on Athos, but also a winemaker, chef and ambassador of monastic cuisine in Greece and Europe. Among his works includes a book of culinary recipes of traditional Greek cuisine, recipes containing nutritional principles recommended for enhancing your diet with plant-based and seafood, as well as fermented beverages stimulating longevity.

According to Father Epiphanios, everything in the culinary art is an expression of love towards those who you want to somehow thank.

You can uncork this wine now or let it hone all of its nuances, align and sharpen all of its notes of flavor and taste for another 5-10 years. Despite its five-year-old age and grape varieties suitable for this wine to be drunk young, Epifanis is only at the very start of its evolution. After a few more years pass, and the acidity is balanced, the tannins will be rounded, and the wine’s inner strength and pleasure you get from it will only increase.

The wine glitters with a pomegranate color in the glass, and this shine reflects not only the color, but the essence of the wine as well: the embodiment of purity. The wine has an excellent, persistent astringency and pleasant bitterness, which unfold with a soft sweetness in its long aftertaste. This matrix wine fills and nourishes the body, clears the consciousness and adds strength with each sip. Vanilla notes fill the glass with light strokes first, gradually getting more and more confident, and then turn into a frankincense aroma transforming into the divine.

Crafted special by the efforts of the Mylopotamos skete monks, Epifanis wine is bright and powerful, and possesses an extraordinary crystal purity.

Reach out to God with every sip!