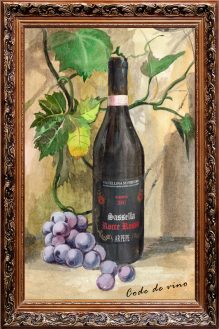 Here we present to you a wine from a region where grape cultivation alone is an outstanding, even heroic deed, and where the appearance of something like Sasselle Rocce Rosse is an incredible event capable of completely overturning your impressions of Lombardy wines. It also emphasizes once again the complicated nature of Nebbiolo, so difficult to predict, but able to reveal its true mysterious potential in the land it loves, even though other varieties may not always feel so free and easy in the misty lands of Piedmont and Alpine highlands of Lombardy.

Chiavennasca (which is what they call nebbiolo in Lombardy) is cultivated in Valtellina, an Alpine valley with glacial origins, on steep slopes at heights of up to 900 meters above sea level. Workers collect grapes exclusively by hand in large baskets, sometimes climbing up and down the slopes, at other times using machinery. In Ar Pe Pe, they even use a ski lift to deliver the collected grape to the winery. Terraced vineyards, like glittering gems scattered along the slopes, bathe in the rays of the Alpine sun all day long, and at night absorb the heat from the soil, formed as it is through granite erosion. The minerals in the soil of Valtellina also give rise to another jewel of this area — its grape.

Ar Pe Pe is a bold project initiated by Arturo Pelizzatti Perego, a representative from one of the oldest winemaking families in Lombardy, whose namesake also graces the winery itself.

The project’s objective was to unlock the potential of Valtellina’s terroir. Wines from Ar Pe Pe are not the result of some automated formula, but rather a philosophy that teases out the best qualities of Alpine nebbiolo, allows every instrument in the orchestra to play its part and bring all those little nuances to the forefront, and express the age-old legacy of this grape variety and terroir. And if weather conditions are unfavorable for the symphony, as was the case in 2008, the winery does not produce any wine for sale.

Each and every vintage is an individual melody, crafted with the help of instruments used by this family for 5 generations, including large 50-hectolitre barrels, steel and concrete reservoirs, and huge amounts of patience and talent in winemaking.

The Symphony of Sassella Rocce Rosse

Sassella Rocce Rosse undergoes long-term fermentation and aging processes for 4-5 years in large-volume (50-hectalitre) barrels, and then continues to age in bottles in the winery’s cellars for another year. In order to protect wine from fragrances not typical for this variety and local terroir, only old untoasted barrels are used.

While composing their symphony, winemakers at Ar Pe Pe improvise and listen at every opportunity, again and again, to make sure all the instruments are perfectly in tune to achieve a fully aged and complete wine (which is why wine age varies from vintage to vintage). Sassella Rocce Rosse 2001 is an excellent example of how winemaking combines art, exhaustive diligence and patience. Four years in barrels was not enough for this vintage, so the producers decided to let the wine keep developing in the winery’s cellar, releasing it for sale only in 2012.

Elegant mineral notes make Sassella Rocce Rosse 2001 an incredibly opulent wine, which unfolds and preserves its qualities both in the glass and open bottle. Even though it has little to no sulfites, this does not deteriorate the taste by even an iota in a week or even two after it was uncorked.

«It’s like the music of crystals – elegant but powerful, fragrant and moderate, forte and piano at the same time.»

«Its fragrance never seems to end: it’s sophisticated, ever-changing, balanced and elusively incomplete, making you come back again and again in an attempt to decipher its mystery.»

«It is a delicate wine. Pleasantly astringent, while developing gradually, it leaves you with a feeling of weightlessness.»