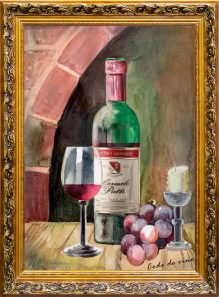 Senor Patti’s winery was founded in 1999 in Lujan de Cuyo, Mendoza province, where the first Argentine technical grapes were planted by the Spaniards in the 16th century. The bodega’s owner Don Carmelo Patti is a local legend, whose wines are one of the best in the New World, according to the experts at Code de Vino.

This winemaker believes that truly natural wines are handmade according to old traditions, all but entirely at home. He makes all his wines himself, surrounding them with his attention and care. Sometimes his methods can be pretty conservative; as a rule, all wines are matured for two or three years in new and old oak casks. Then, mind you, they continue to age in bottles for additional 5-7 years.

Even with these eccentric tendencies, Carmelo Patti is considered one of the top enologists in Argentina with his boutique wines. This master influenced the development of the Argentinian wine industry as a high art of both wine production and consumption. His wines, produced by hand, enjoy rave reviews from connoisseurs of fine wines all over South America.

Carmelo Patti is an outstanding winemaker, and these qualities come out in full in his unique wines. The volume of some of his millesimes may not even exceed 1,000 liters. It all depends on how Don Carmelo rates the quality.

The color is dark ruby with orange and brick shades at the edge of the glass. The aroma has hints of garden and forest berries, black currant leaves and raisins, blackberries, and olives. As it unfolds, the wine adds a light tone of violets, the aroma of herbs, green bell pepper, dark chocolate, spicy tobacco and smoke.

12 months of maturation in new and old oak casks gives this wine some «caramel tones» and a taste of coffee with a touch of vanilla, which makes it even more expressive.

This is a mild and full-bodied wine with a round flavor. The tannins and acids are magnificently balanced. The wine is revealed as if from within its body, and its long, enveloping aftertaste is a result of the pronounced and balanced tannins, and bright yet mild acidity.

This wine requires exceptional preparation, which is indeed what makes it so unique. This wine is for anyone fascinated by the world of taste. Patience, endurance and a non-standard approach are what is needed for the preparation of this wine.