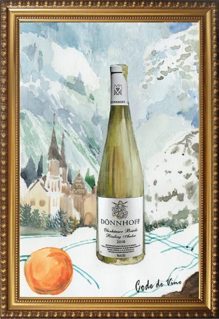 We are proud to present one of the best 2009 German Rieslings in the QbA quality category. The harvest of 2009 was rather lucky for Nahe region, resulting in the production of matured wines without the need for much additional effort. The high quality of the Riesling is largely due to the combination of the full-bodied wine with touches of acidity.

2009 experienced colder temperatures than to those in 2008, giving the wine a more acidic flavor profile. To some extent, temperatures in 2009 highly resembled those in 2007, the best year for local wines in the region. Regardless, Hermann Dönnhoff was able to introduce the public to yet another exciting new wine. The wine can be enjoyed right away or stored until reaching full maturity.

The rocky, volcanic soil is rich in quartz and quartzites. The local Riesling gets its strong minerality from crystalizing rock in the soil. The hills and the Nahe River form a particular microclimate. The average temperature in the area can be around 0–8°С in winter, 5–13°С in spring, 20–22°С in summer, and 14–18°С in fall. The rainfall is moderate, reaching its peak in June.

2009 Dönnhoff Riesling Trocken is a rich and concentrated wine, which sets it apart from other wines in its category. The saturation of the wine dictates the definition of its flavor as well. This wine requires concentration and time, so as to not be deceived by its freshness.

Eventually, the wine will develop notes of petrol, which is expected from wines of this high caliber. Once the original notes of peach and citrus fade, the aroma will reveal its true form. However, this will only be achieved if the wine is allowed to rest in the glass for a short while, giving way to an enjoyably strong flavor which leaves a long-lasting impression. Of course, the 2009 wine is still young and requires some fiddling with. Yet despite its young age, it is full of character.