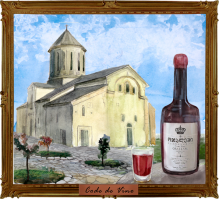 The ancient Ojaleshi grape is a treasure of Western Georgia. It grows in Samergelo and Lechkhumi, and while we typically refer to Lechkhumi as a winemaking region, it is less true for Samergelo, which is why Ojaleshi can be considered a divine gift presented to the area to fix this imbalance. But what is even more interesting is the initiative to restore the Chkondidi monastery and traditions of Samergelo winemaking are rooted deep in this local variety and national production techniques.

Samegrelo is a region in western Georgia. In the past, it was the land of the legendary Colchis Kingdom. Now we can find here tilled, populated valleys, less populated foothills and lonely mountains. And little to no vineyards. The climate here is indeed too humid for them, so grapes don’t build up enough sugar, and as a result the wine does not achieve the necessary alcohol content. Wine produced here is too watery. The Tsolikauri grape that grow here are teased in eastern Georgia with the name Tskalikauri (tskali means «water»). Still, this region has its own hidden gem—Ojaleshi, which grows in the foothills of the Martvili region, where it shows its true power.

About 50 local grape varieties are cultivated in western Georgia. During the Soviet Union, the majority of lands in Samergelo were used for tea plantations, while winemaking was concentrated in Kakheti. However, Ojaleshi wine has been being praised in France since as early as the 18th century, and has even won several international awards. Today, the Chkondidi Monastery is breathing new life into the Samergelo traditions of making wine with Ojaleshi.

The vineyards of Chkondidi Monastery are located on the Salxino wine farm, 15 km from Martvili. This is native land for Ojaleshi, where it has been being cultuvated since ancient times. Historically, Ojaleshi was cultivated here because of the high mineral content in the soil. This variety has the maximum capacity to absorb and use all of what is available.

There are no sharp changes in temperature in the region either, and active temperatures of 39-42.5°C are enough for ripening. It is also interesting that calcareous soils are also present here, along with humus-carbonate and brown soils, which ensures the strong vegetative growth of bushes and increased yields. This is not always good when the task is to get berries of a particular quality, but with Ojaleshi it’s only for the better—the leaves are formed very early to start photosynthesis, which is necessary to build up the right level of minerals.

This is a rare example when young vines, just 4-5 years old, can be used to produce a rich and powerful wine. In Salxino, the power of land combines harmoniously with the power of the grape.

Ojaleshi is an ancient grape variety. In Megrelian, «ja» means «tree,» and the grape got this name because it grew by crawling up other trees. It is also known under the names Svanuri and Shonuri. It is safe to say that Ojaleshi created its own system of vine growth, guaranteeing ideal conditions for maximum photosynthesis and high volumes of polyphenols in its berries—everything it needs for us to turn it into an amazing wine. Peter of Chkondidi says that Ojaleshi is more like a living creature. These days, it’s also not unusual to harvest Ojaleshi creeping up trees, which is a method of vine cultivation called «maglari» in Georgian.

The main advantage and power of Ojaleshi is its capacity for photosynthesis. Its leaves are specially adapted to capture the energy of the sun and wind, and process it into what then makes a great wine. Ojaleshi berries are dark blue, almost black in color, with thick skin and viscous flesh. It ripens later compared to other varieties and its sugar content can reach 17 to 24%.

Ojaleshi is perfect for making both dry and naturally semi-sweet wines, depending on the winemaker’s plan and vintage: natural conditions vary from year to year, which changes the level of sugar in grapes.

Today, His Grace Peter is in charge of developing techniques of making wine from Ojaleshi. For him, it is a sort of mission, as many local winemakers in Samergelo have recently begun to trade out their Ojaleshi plantations for the less demanding Isabella and Tsolikauri.

Ojaleshi wine has been known since the 18th century, when Prince Achille Murat, the grandson of one of Napoleon’s Marshals, who was married to the Dadiani princess, started to produce it. He made a dry wine, which gained significant fame in France and won international awards. The French had their own method of stopping the fermentation process using the cold by just throwing barrels into the river to stabilize the wine. Now this technique is mostly used in the production of semi-sweet Ojaleshi wine.

The production of semi-sweet wine in Samergelo isn’t a simple process, taking into account the region’s climate. Even though the Chkondidi monastery makes dry wine from Ojaleshi, they also try to extend its ripening period and postpone harvesting until late November. They risk losing a big part of the harvest (up to 30%), but in exchange it allows the remaining grape to build up a 23-24% sugar content in the berry.

Very few wine producers do this in Samergelo, but then again, no one here makes such a powerful Ojaleshi wine as Chkondidi Monastery. This wine has the ability to stabilize and protect itself, and the higher the mineralization (over the years, thanks to vine and root growth), the better the result will be.

The monks here produce all the wine from scratch on their own and store it in a 19th century marani. According to experts, their wine is exemplary Ojaleshi, but unfortunately it is not available for general sale to the public. We would also like to note that several kinds of Ojaleshi have appeared on the market recently, made in Telavi, Tbilisi and in private wineries in Martvili, but its quality still doesn’t reach that of monastic Ojaleshi.

Its beautiful crimson color and hardly noticeable rim of sunlight at the top lights Ojaleshi up inside the glass. It features the velvety, tannic and notes of pomegranate that love to make an appearance in many Georgian wines, despite the grape, region or winemaker. Apparently, this is the way the Georgian land manifests its power in the wine—through pomegranate, the local symbol of fertility.Despite its powerful character, Ojaleshi has the delicate aroma of raspberry and barberry. I don’t even have the heart to call Ojaleshi wine actual «wine»—rather, it is a pure elixir, fresh, vivid, with a soft and sophisticated taste, long-lasting mineral aftertaste and slightly noticeable bitterness.