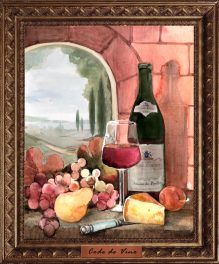 Albert Bichot’s wines, and of course the man himself, don’t need special introduction. Code de Vino magazine has already shared with its readers (№5 of 2010) all about the Knight of the Tasting Bowl Brotherhood. The Bichot wine dynasty is one of the oldest in Burgundy and dates all the way back to the 13th century. Throughout the centuries, the Bichot dynasty has helped expand the circle of adherents of the Burgundy wine style by engaging in the wine trade, Pinot Noir cultivation on its own sites, and wine production in general. The Bichot family has gradually and persistently contributed to the spread of the organic principles of vine cultivation in Burgundy, which is indeed particularly difficult and takes a lot of effort in Burgundy’s cool and humid climate.

Clos de Marechaudes is completely owned by a single individual, Albert Bichot, which is well reflected in the Monopolis name. This is quite rare for a Burgundy, making it a particularly happy occasion to try such a wine.

The soils at the site consist of a brown limestone covering layers with a high clay content. There was once a swamp on these lands, and it took some time and serious drainage work to make the soils suitable for growing grapes. But the result justifies the efforts, as the vines of this site in Aloxe-Corton have been doing exceptionally well for more than 30 years, producing strong, full-bodied, beautiful and sensual wines. Vinification usually lasts for 20-28 days at a strictly controlled temperature, and the wine is then further matured in barrels for 18 months.

There exists the opinion that wine lovers are split into two groups when it comes to Burgundy: «love at first sight» and «never in my life.» Clos de Marechaudes by Albert Bichot turns this view upside down, as it has no ardent opponents, only those who haven’t been lucky enough to have tried this wine yet. Its secret rests in the treasures of the slope, concealing the natural layers of minerality from curious eyes, and of course, the art of winemakers who have managed to express this wealth in their wine.

Taste the lacework of juicy berries, soft touches of spices, and light tones of green and black pepper. The peppery notes are like a whiff of the breeze that blows away the signs of the berry sweetness before you manage to dive into it head first. Subtlety, elegance, rigor, consistency and fullness. Nothing superfluous, just strength and character. A royal character that makes it easy to bend the knee.