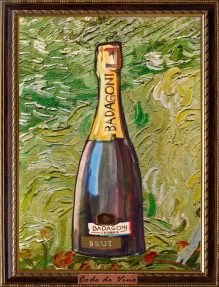 The world of Bacchus is unpredictable and magical. I never thought I would ever have the pleasure of describing a sparkling wine, where the history of one bottle turns out to be a significant story!

If we talk about sparkling wine not in terms of the classic champagne process, but as an important drink, we must admit that the Badagoni have created a wine for people who aren’t ready to wait ten or more years to drink a classic champagne.

But still, few people today speak about what’s most pressing: that there is no true sparkling wine in any shops at all. And today, on August 4, as I write this article and the whole world is traditionally celebrating and praising champagne, I’ve decided to dedicate it to the sparkling wine of the Georgian company Badagoni. And I have to mention: the speed of the cork’s departure, which reaches up to 120 km/h, isn’t a good indicator unless we’re trying to congratulate the winners of a Formula-1 race.

Warning: those of you who want to risk checking the speed, please don’t point the bottle directly at anyone and don’t look at the cork. Also, don’t try to cork up the overflowing champagne with your mouth, as did American driver Daniel Sexton Gurney on one of the nights on April 13, after which it probably occurred to him that it was better to shower with champagne.

However, the main product in the world of sparkling wine has to be brut. And here the question is immediately raised not only about the type of grapes, but also about the mineralization, which makes real champagne unparalleled. But this requires storing your bottle for at least ten years, while the minerals alter the quality and intensity of the drink. And if it’s any less, I wouldn’t call it champagne at all, but rather raw material, wine material from Champagne, which can only be called champagne when opening a bottle before the due date.

So, Sexton by Badagoni. Here you feel a little bit of sex, and a little bit of tone, but the main aspect is its noble freshness. In a word, I must thank the producer of this wine, and sincerely hope they won’t ruin its copies in subsequent years; and that their efforts will reveal to people the true concept of taste and value in a sparkling wine, which in fact doesn’t need to be aged.

In general, the first sparkling Badagoni is really a millesime wine, which we can also expect in the future, regardless of being from a good or bad year, as it’s unique, and I dare even claim the wine is heaven-born.

This is a masterpiece that shows its character with its first sip, attracts with a subtle bouquet of paradise flowers, fruit, berries and, of course, a sparkling straw color against the background of long-lasting bubbles that escape from their confinement of a perfectly harmonious drink for the first time.