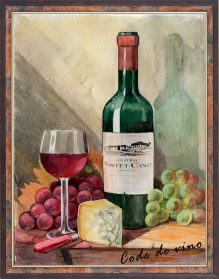 The Pontet-Canet wine estate was first formed at the start of the 18th century. Its founder was Jean-François de Pontet, Master of the Horse of the Royal House, who eventually became Governor of Médoc. He was the first to consolidate several land plots located in Pauillac for the purpose of planting vineyards. 100 years after, in 1855, Château Pontet-Canet received the status of AOC and was included in the Grand Cru classification (5th level).

Château Pontet-Canet of 2005 is truly a next-gen wine. It is produced without any chemicals or their derivatives. Winemaking is considered by the Tesserons as biodynamic, which serves as the main concept behind their processes. Indeed, the entire grape cultivation and winemaking process takes place under the watchful eye of wine production manager Jean-Michel Comme. This isn’t done for any economic reasons (two people manage the process at most wine estates: one is a viticulturist, and the other is the winemaker), but to better understand the soil and all the cyclical processes of the vegetative period and nuances that influence the vinification process.

The method of growing grapes at the Tesseron household can be compared with the ancient art of winemaking, when people were guided by phases of the Moon and Sun, and the vine was perceived as something animate and endowed with divine power. In order to analyze the phenomenon of cyclic vine growth, Pontet-Canet started taking an interest in religious rituals, the traditional agricultural calendar, various holidays and their connection with the planets. Throughout these studies, the winemakers decided to preserve and restore some of the more traditional methods of winemaking.

The vegetative period manifests the best traditions of classical Bordeaux winemaking. The entire year, except April, was dry enough. In line with the dry and warm, but not hot, summer and the pronounced contrast of day and night temperatures, the harvest still turned out excellent. The dry and warm fall contributed to the favorable grape harvest. According to experts, the 2005 harvest in France was simply exceptionally good. It has been referred to as the great vintages of the century, like the classics of 1961, 1945 and 1929. This year, the Pontet-Canet estate also embraced a new approach to the production of top-quality wines.

The Pontet-Canet estate is located in the Pauillac commune (Médoc county, Bordeaux region, department of Gironde). The vineyards occupy an area of 120 hectares. Cabernet Sauvignon occupies 62% of the total area, Merlot takes up 32%, Cabernet Franc – 2%, and Petit Verdot – 2%. The density of planting is 9-10 thousand vines per 1 hectare of vineyard, which is the traditional mode of soil cultivation for Médoc.

The vineyards are located on the central part of the plateau of Pauillac on typical Médoc soils composed of quaternary gravel lying on a subsoil layer of limestone and clay. This soil composition creates excellent drainage conditions and allows for deep, dark red wines, sometimes of an almost black shade, with a pronounced bouquet of black fruit and berries: black currant, prunes and figs, as well as cedar and cocoa flavors.

It is a classic representative of Bordeaux wines, featuring tones of forest berries that gradually transform into the smell of cigar boxes over time. However, in wines with real strength and saturation, like Château Pontet-Canet 2005, the taste and aroma of the wine will change during consumption. This depends both on the wine itself and on the individual organoleptic perception of the organism. Therefore, we classify such wines as analytical, and define their taste as contradictory, requiring a certain discovery and analysis.

Only the lightest pairing is recommended. A soft creamy Brie cheese with its sweet and salty taste and nutty notes forms the perfect company.