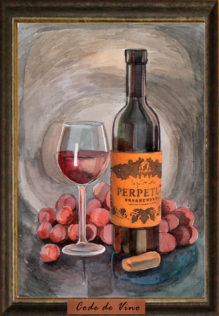 Producer: The vineyards of Nikortsminda Eparchy

Are there really that many wines in the world with a monument built in their honor? Well, Khvanchkara is one of them! A majestic bottle of Khvanchkara stands at the entrance to Ambrolauri (near the Khvanchkara zone), so visitors to the town won’t be able to miss it.

For Georgia, Khvanchkara is more than just a wine. It is the national pride and love of Georgians, and its own sort of greeting card to the world of domestic winemaking, which is most famous for its natural semi-sweet wines. It does not have a single analog in Georgia or anywhere else in the world. Nature bestowed to this wine just a single region, and its name is Racha.

The spiritual center of Racha is the ancient Nikortsminda Cathedral outside of Ambrolauri. It was built in the 11th century, and stands out for its breathtaking stone carving decorations. Today, the cathedral located in the famous wine-growing area of Khvanchkara is one of the most fascinating wine producers in the region. In 2015, Bishop Vakhtang (Liparteliani) became the head of the Nikortsminda Eparchy, and thus the face of its wonderful wine.

Racha-Lechkhumi is located in Western Georgia, a region often reffered to as the kingdom of naturally semi-sweet wines. Indeed, Racha holds the unofficial status as «Georgia’s Switzerland.» From the northwest the valley is separated from Svaneti and Lechkhumi by the Lechkhum Ridge, and in the south from Imereti by the Racha range. The mountains of the upper Racha are covered with snow caps, and in the lower part of the valley they are covered with woods, and the terrain is constantly in bloom. Numerous picturesque lakes are scattered throughout the valley, and the mineral water here is considered to have healing qualities, attracting droves of tourists to the area.

The locals are very kind and calm, and all the houses and yards are well cared for. Racha residents work steadily and slowly, without any haste. It is as if they know they have all of eternity just for themselves. This place is filled with harmony, peace and tranquility.

The Rioni River that flows through Racha divides the valley into two parts: Upper Racha with its snow-covered peaks, and Lower Racha and its picturesque greenery. The Khvanchkara microzone is part of the Lower Racha.

Khvanchkara wine would never be what it is if it wasn’t for the grape cultivated in the Racha region. The reason for this lies not in the regulations of Georgia on winemaking, but in the qualities of the wine. If you consider that it takes about two kilograms of grapes to make one liter of Khvanchkara, it becomes abundantly clear that nature itself set clear limits on how much Khvanchkara can be produced.

The history of Khvanchkara wine

These local wines could have remained a product of exclusively domestic consumption, if not for the extraordinary wine, which was originally known here as Chorjo after an old village. In the 19th — early 20th century, the wine started to be known as Kipianovo, and later it was changed to Khvanchkara after the village of the same name.

Many famous rulers and artists have found inspiration, power and even love in this ancient wine. The Georgian tradition has preserved the stories of Mamluk Daud Pasha, a native of Georgia who was taken to the Ottoman Empire as a child and served the pasha of Baghdad. At the Baghdad court he built a brilliant career for himself, and in 1817 rose to the head of the city and led the movement for independence from the Turks. As legend has it, it was Chorjo that granted him the power to become an influential politician.

It was named Kipianovo after its producers, Levan and Dmitry Kipiani, brothers from an old noble family. As so often happens, fame found this wine in an unexpected way: The brothers presented their product at a fair in Belgium in 1907, where it enjoyed overwhelming success, earning a gold medal and an award from Leopold II, the king of Belgium.

It was also the favorite beverage of another famous historic figure—the leader of the Soviet Communist party, Stalin (in fact, the wine was renamed Khvanchkara during his time in power). His first wife Yekaterina Svanidze also loved this wine. According to local legends, they first met when they came here to taste the wine.

Stalin liked Khvanchkara, but he loved even more to offer it to his guests. Khvanchkara, together with Ararat cognac, was also the main drink during the famous conferences in Yalta and Tehran (during WWII). The head of the British delegation, Prime Minister Churchill, was stunned by the taste of Khvanchkara, despite being such a loyal fan of whisky. As the story goes, several vines were even sent to Mr. Churchill and US President Roosevelt as a gift, as it had made such a strong impression on them. The Chinese leader Mao Tse Tung also praised this wine highly.

In 2010, the Georgian government adopted the law «On Controlled Wine Regions,» according to which Khvanchkara can only be produced in a certain area. This area encompasses a small group of villages in the Ambrolauri district of Racha, including Khvanchkara, Didi-Chorjo, Patara-Chorjo, Sadmeli, Bostana, Pirveli-Tola, Meore-Tola, Chrebato and Zhoshka on the right bank of Rino, and Bugeuli and Abanoeti on the left bank. What grants Khvanchkara its signature flavor is the combination of two autochtonous grape varieties, Mujuretuli and Aleksandrouli, in a strict 50/50 proportion. These grapes are what gives this wine its unique taste and bouquet. Khvanchkara has a dark ruby color, but not thanks to the juice, which is transparent in both grapes, but to their dark blue, even black color.

Both varieties are typical for Georgia, and according to some sources, Mujuretuli is in fact a variation of Alexandrouli, but unlike the latter can only be found in Racha-Lechkhumi, while in other areas it fails to produce acceptable wine.

There have been attempts to cultivate Aleksandrouli in other regions of Georgia, but its properties always change much too dramatically. This is another reason why Khvanchkara, unlike other naturally semi-sweet wines, cannot be reproduced anywhere else in the world. Khvanchkara can only be made with Racha, and only with the sort harvested in the Khvanchkara microzone. The Ambrolauri area enjoys a warm climate, and even the driest months here provide enough rainfall for grapes. The vineyards of the eparchy are located 600-800 meters above sea level. The climate in this area is very different from that in other wine regions of Georgia, with its moderate rainfall, high total of active temperatures, and no sharp changes. As a result, the grapes ripen completely and evenly, in the process accumulating a high proportion of sugar, up to 30%.

Racha’s unique locale was so favorable for the production of naturally semi-sweet wines, that the use of special technology for their production comes as no surprise. The fact is that the process of harvesting and fermentation of grapes occurs in the late fall, when the temperature at the foothills of the Greater Caucasus Range is relatively low. In these conditions, natural fermentation takes longer, and can even come to a complete halt during winter. This is why fermentation produces such a high level of residual sugar.

In other words, during fermentation, the grape juice accumulates a lot of alcohol (up to 10-11%) combined with high sugar levels of up to 50 g/dm3. This wine is enjoyed during winter and early spring, as it is difficult to store such under-fermented wines in warmer days because otherwise, the fermentation process starts all over and the wine becomes dry.

Thanks to the influence of the local climate and its special technology, winemakers of the region manage to produce excellent, natural semisweet wine with a captivating freshness and bright taste and aromas. The secret of the Khvanchkara charm lies in the freshness and brightness of its taste and aroma, achieved through slow fermentation at low temperatures. Just like in their daily lives, the Racha people have learened not to hurry.

In order to preserve the bouquet and taste of true Khvanchkara, they stop fermentation by cooling the juice to –1°C, and maintain this temperature until the wine is bottled. Both cold storage areas and special insulated vats are used for this purpose. This is how the wine is stored; the two types are vinified and blended directly before the bottling process, which is more demanding because it is essential to prevent a second fermentation, as the wines become more unstable with a higher sugar content. Either of the two approaches can be applied: hot or cold bottling.

Cold bottling is accompanied by a filtration where the filter material has a pore size smaller than a single cell, acting as a sterilizing agent to separate microorganisms from the juice.

With hot bottling, the wine is heated to 60°C, which provides the necessary protection against secondary fermentation, but the very essence of the Khvanchkara, its freshness and aroma, is almost completely lost, and the wine takes on notes of boiled fruits. Cold bottling helps to avoid all these troubles, but it is expensive and complex, and not every manufacturer can afford it. And even then, part of the aromas evaporate, but there is no other viable solution currently available. Otherwise, it would be impossible to introduce this wine to the market.

According to the rules, Khvanchkara can be put up for sale immediately after the beginning of the year following the harvest. This wine must be consumed young, preferably in its first year and before the following fall, or it will lose its wonderful grape flavor and color.

Khvanchakara even has its own «guardians» — beings whose hands and minds perfect and protect this precious pearl of wine. Guram Sultanishvili, the head winemaker of the Ambrolauri factory, at 83 years old knows exactly how to make a real Khvanchkara, and the tremendous amount of effort it takes. Winemakers even have their own phrase to describe how hard it is to make Khvanchkara: only a true master can tame this genie in a bottle!

People continue to tell and retell the numerous stories and legends about Khvanchkara. Some of them are of times of trouble, when the vineyard area was reduced, the number of consumers plummeted, and the wine started to be bootlegged. Despite official limitations, even today much of the wine produced under this name is far from what’s considered real Khvanchkara. Sometimes dishonest producers add too much Saperavi to it (even though it cannot exceed 5% in a true Khvanchkara), and sometimes they don’t take enough care to ensure proper transportation and storage conditions.

There are also plenty of copyright and place of origin schemes. For example, Bulgaria produces its own Khvanchkara, despite a law in 2012 declaring it a national brand of Georgia. No more than 60,000 bottles of real Khvanchkara are made in Racha each year, while the other products on the market are at best wine made from wine material produced in Racha. Plus, it is incredibly difficult to export it out of Racha, as you may remember. It is almost impossible to transport this wine without inevitable changes in taste and quality.

For this reason we highly recommend tasting your first Khvanchkara in its homeland in Racha, and only then can you compare it to other versions produced in other areas, if only to confirm that the Khvanchkara of Racha is the best, and come back again to visit this wonderful land!

Khvanchkara from the Nokirtsminda Eparchy is known for its balanced combination of its grapes’ brightest notes, including tones of raspberry, mountain violet, and dark red velvety roses with a full and rounded aftertaste. What gives this wine its special savory playfulness is the slight, natural saturation of its carbon dioxide bubbles, a pleasant side effect of slow fermentation. The unique taste and technique of this amazingly beautiful wine are a product of nature itself. Nothing superfluous, nothing extra, just the harmony of nature and human effort.