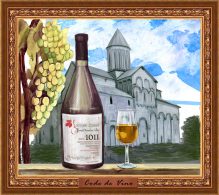 In the picturesque Alazani Valley, situated at 400 meters above sea level and surrounded by the peaks of the Caucasus, you can find the majestic Alaverdi monastery, the center of spirituality and winemaking in the Kakheti Region. The monks here have been carefully sustaining the centuries-old traditions of local wine production since time immemorial.

The white wines of Kakheti form a distinct category of wine that can be found only in Georgia. They are a treasure trove of mysteries and secrets, made with one-of-a-kind, thick local grapes known here as «chacha,» filled to the brim with micronutrients, and of course the qvevri, or vessels of true winemaking magic.

Alaverdi Monastery Cellar is the Alaverdi monastery’s winery brand. Here, the production of wine came to flourish as early as at least the 11th century AD. Even today, in the cellars of the monastery one can find qvevri preserved from that time.

The Rkatsiteli of 2009 made in qvevri in the Alaverdi monastery is the crystallized power of this space, concentrated in a golden liquid seemingly glowing from within. Have you ever wondered what pure gold would taste like if it was transformed into a drink? Well, I would say that this elixir from the Alaverdi monastery is as close as you can get. It blows you off your feet with a spectrum of emotions and experiences: tenderness, softness, velvet, warmth, nectar, sonority, freshness, and shine.

The word Rkatsiteli literally means «red vine,» but in fact it is a local Kakhetian white grape. Apart from being used in the production of wine, it also tastes amazing when eaten as is, right off the vine. It is the gem and foundation of the Georgian winemaking tradition in general, and Kakheti in particular.

The Rkatsiteli of 2009 of the Alaverdi monastery, just like hundreds of years ago, was made in qvevri with pomace, which nurtures it like a mother her child. And, like a child who was surrounded with love and care since birth, this wine has an original and vivid character.

For their intense color and high tannin content, Kakhetian wines are often called by the name «amber, or tea wine,» but when you look at a glass of Rkatsiteli 2009, you can’t helping exclaiming exactly what the Metropolitan bishop David said: «This wine is pure gold!»

Everything in this wine is well-structured, moderate and noble, as befits a drink given to us by the heavens. It is so special, powerful and diverse even among other Rkatsiteli, that perhaps it should be classified in a league of its own as Alaverdi Rkatsiteli to emphasize its uniqueness.

The taste of the Rkatsiteli made in Alaverdi is quite elusive and hard to classify: it is so different from any other wine made from this grape, it’s almost impossible to believe. This wine carries in itself the mystery of the spirit of the place, its sacred status.

Every bottle of Alaverdi Rkatsiteli is a message of this monastery to the world; it is like a masterpiece of art in the world of wines.