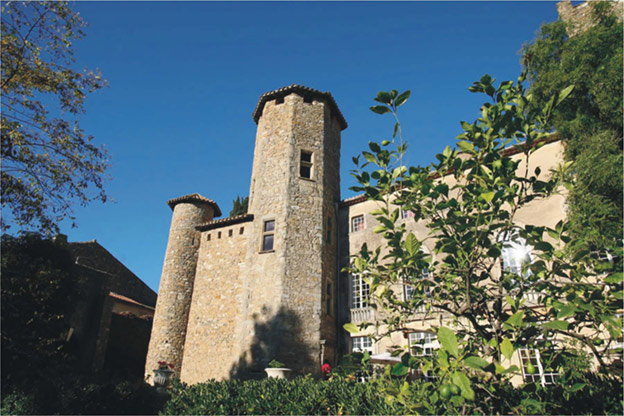 The oldest winemaking region of France, Languedoc-Roussillon, stretches out along the Mediterranean coast. In these places, «tradition» is not just some hollow word. Among the beauty of ancient castles, tiny villages, rocky hills strewn with vineyards, moors and pine forests in the heart of Minervois vineyards at the foot of Montagne Noire, lies a picturesque corner of Agel with its awe-inspiring castle. It can still remember the times of the Crusades, but today its walls are far less impregnable… Although not so long ago it was all but abandoned, now its doors are open to visitors. The hostess herself even organizes local wine tasting parties in the old cellar. 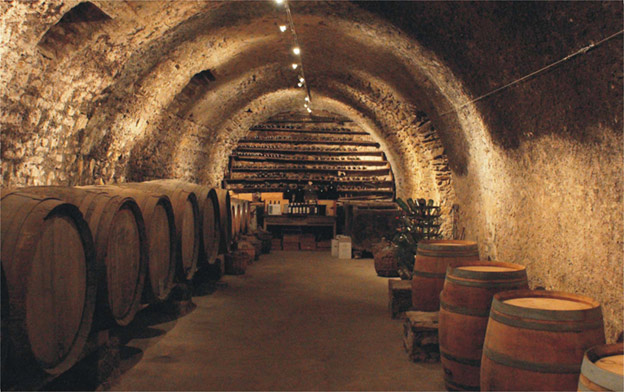 The castle surrounded by the village used to be a fortress, and has deep roots in history: part of the buildings in Chateau d’Agel date back to the 12th century, including a secret tunnel built to connect the fortress to the outside world during a siege. At the height of the Crusades in the 13th century, the fortress became the center of a battleground. In 1210, the castle served as a stronghold for the Albigensians (Christian current from south of France), vassals of Raymond VI, Count of Toulouse. To rein them in, the Pope dispatched crusaders there led by Simon de Montfort. As a result of the fierce battles, one of the castle’s towers was set on fire.

For several centuries, the castle was reconstructed and modified according to the architectural principals of the age. This sublime building ultimately preserved some traits from all of them: a tower from the 12th century, windows from the Renaissance, an 18th century facade, and furniture from the times of Louis XIV and Napoleon III.

In 1763, the Ecal family made it their family seat and began passing it down to their descendants ever since. At the start of the 20th century, the building was becoming increasingly decayed and beginning to deteriorate, and its north wings almost fell into ruin. In the 1960s, the Ecals started reconstruction works. But it wasn’t until 2004, when Martina Ecal-Besse became the owner of the castle, that the real changes began.

New life for an old castle

The restoration of chateau d’Agel was an obvious goal of Martine, as it was her home, where she used to spend a lot of time as a little girl. However, this wasn’t an easy step to make after living in Paris and working there as upper management in a large-scale company. 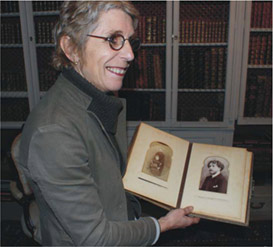 After her father passed away, Martine Ecal-Besse and her two sisters faced the prospect of selling off the castle. But when they had located a buyer, a wave of protest overtook Martine. It seemed impossible to transfer the castle of her childhood into a stranger’s hands. Only after spending a considerable sum did Martine manage to retain ownership of the castle.

Since then Martine has given up her past life as a Parisian businesswoman and devoted her time to the reconstruction of the castle, trying to adapt its authenticity to modern needs. «I had to get to work on a lot of issues,» she recalls. «How do I build bathrooms and central heating, or install a wireless Internet connection and satellite TV without destroying the historic charm of the building? How was I supposed to maintain the marvelous greenhouse and magnificent library after opening them to the public? How do I arrange things so I receive the maximum amount of visitors, knowing that I might have guests from Beziers (a small town 30 km from Agel), or Brisbane, Paris, Seattle? Plus, how do I open the doors of the castle, located in the very heart of the village, to the citizens of Agel, because it’s their castle too, and something they want to demonstrate proudly to their friends. And how do I modernize the vineyards?»

Martine personally supervised all the reconstruction works, which lasted a total of two years. Thanks to her efforts, the library, which was already quite sizable, was expanded even more, including complete visitor access to all works, including family diaries. Martine is easy-going, and she’s always happy to chat about her family’s history, chateau and the vineyards.

Agel also includes its citizens, who feel a special passion for wine and winemaking, such as Robin Budowski and Jeff Bernabeu, the owners of local vineyards. Their ambitions have no limits. At first, Jeff normally offers you a taste of his wine, followed by a horse ride around the vineyards. 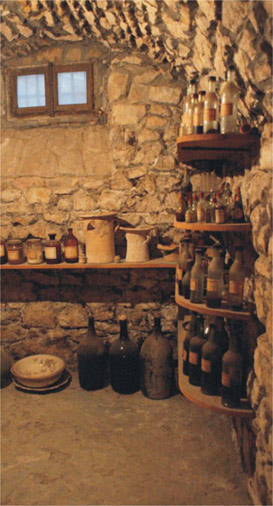 «As far back as I can remember, I’ve always wanted to make wine. I knew I could do it, so I started looking for good soil and vineyards with a decent reputation. As it turns out, there is a lot of land in Languedoc that hasn’t yet revealed its potential,» Robin Budowski explains his choice. D’Agel matched Robin’s requirements perfectly, as its vineyards are categorized as Minervois AOC, which has existed since Roman times.

The winemakers in chateau d’Agel put quality control above all else. That’s why they decided to replace 10 ha of traditional Cargnan for the younger vines of Syrah, Grenache and Mourvedre for red wines, and Grenache Blanc, Muscat, Viognier and Marsanne for white. The total area of vineyards expanded from 38 to 42 ha. The terroir here consists of alluvial benches and pebble soil.

All equipment, the packaging design and even the wine assortment was also renovated and revamped. Robin Budowski developed a new marketing strategy for their wine and successfully organized their export sales. Currently, the winery produces 8 different wines, 5 of them red and 3 white. Wines from chateau d’Agel have received international awards at numerous wine fairs, and are exported to 14 different countries.

They are stored in the cellar of the castle, where the hostess organizes tasting events. Also available for tasting are the fascinating wines from the nearby La Voulte-Gasparets chateau.

Chateau La Voulte-Gasparets has a unique terroir. Its southeastern location on a rocky slope consisting mostly of pebble and sandstone is the main advantage that helps Chateau Voulte-Gasparets produce some of the finest quality wines around. Rolled quartz pebbles have excellent drainage properties, as well as the ability to accumulate heat from the sun during the day and emit it at night, thus creating a very unique microclimate. This feature of its soil gives the vineyards of Voulte-Gasparets massive benefits. 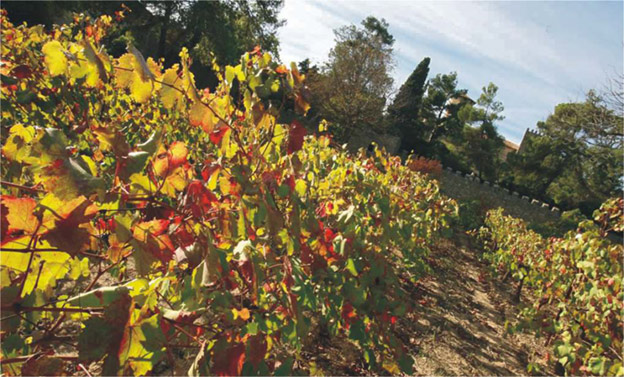 This winery is held in joint ownership between the Reverdy and Burgess families, two branches of the same dynasty. Patrick Reverdy makes wine together with his son, Laurent Reverdy, and his nephew Jean-Marc Burgess. They also hire about 30 people every year to harvest the grapes by hand.

Four principal varieties are cultivated here: Carignan, Grenache, Mourvedre and Syrah. Historically, Carignan and Granache have occupied the largest part of the vineyards. Carignan takes up 50% of the area, Grenache 25%, Mourvedre makes up the rest and Syrah, so to speak, rounds out the remaining sharp corners. Carignan and Grenache are autochthonous varieties (local varieties with a long history). Carignan is widely spread in the south of France, and Mouvedre originated from Provence.

The vineyards have existed here for so long that Laurent Reverdy never even managed to determine the exact year of their origin. The legends only mention the name of Romain Pauc, the ancestor and founder of the vineyards of Voulte-Gasparet. In 1963, these vineyards survived the devastating invasion of Phylloxera, the American pest, which fed on the roots of the vines. A botanist invited here from Montpelier began grafting the local vines to American roots, which were immune to Phylloxera, and ever since then the Franco-American vine has rewarded growers with many successful harvests.

In the tasting room of the chateau, Laurent Revery talked more about the region’s local wines. 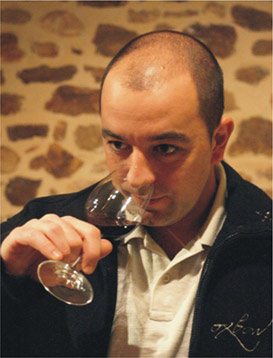 — Are the wines you make best stored for a long time? Or are they better to drink right away?

— Generally, I recommend to store our wine for 8-10 years. At the moment we’re selling wines from 2006, and I would advise to keep it stored for one or two more years before tasting.

— What is the longest stored wine in your own cellar?

— Which harvests do you consider the best?

— If we talk about the number of sunny days, 2006 wasn’t as good as 2005, when the wine had acquired more fruity tones. Besides, the wines from 2006 have less potential for storage.

— Can you tell us some more about how your wines are produced?

— We pick grapes only manually, starting with Syrah and finishing with Mourvedre. Baskets with bunches of grape are emptied on folding tables, and the bunches are left intact for a while to allow the natural sugars to ferment the grapes from within, thus giving the wine a fuller body. Only after that are the grapes pressed. 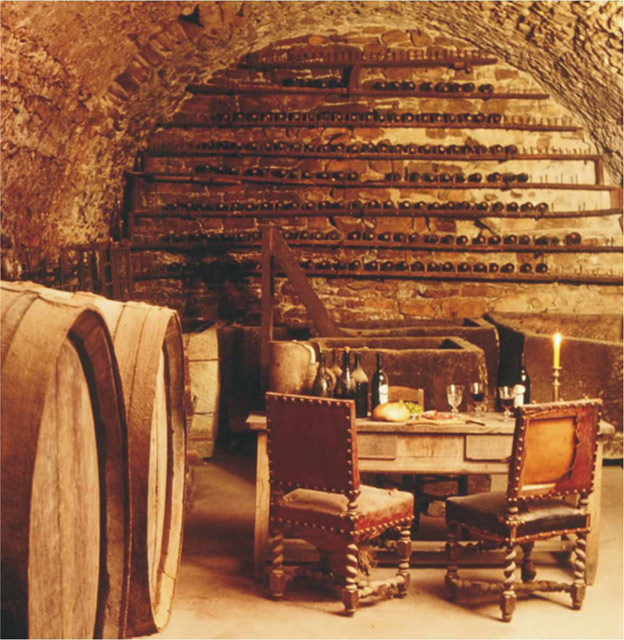 — That means the fermentation begins right on the vine!

— How long do you age your wine in barrels? 12 months?

— Yes, we age Cuvee Romain Pauc for 12 months in barrels, the same as we always have.

— Do you use new barrels?

— We use them for 5 years and then get new ones. Part of the wine produced in 2005 was made in new barrels (around 20%), and the rest was aged in old, used barrels.

— How many bottles do you produce each year?

— About 250-280 thousand. That’s mostly red wine, of course. We export only 25% of our wine, most of it goes to Belgium. The rest is sold with hardly any advertising. Our wines are quite popular… 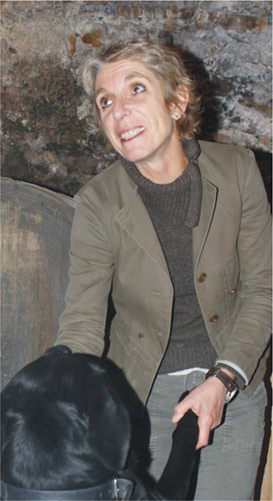 Martine Ecal-Besse and her husband Jean-Marie are happy to receive everyone who wants to visit their family home: currently, the old castle is available to rent for various events, seminars, meetings, weddings, etc. You can come for just a short vacation and rent a room, or a suite or the whole castle.

For the last few years on All Saints’ Eve, Chateau d’Agel hosts the festival of Grands Chemins de Minerve, which includes concerts, art and sculpture exhibitions.

«Don’t come to d’Agel if you’re looking for the artificial atmosphere of a typical five-star hotel. Visit us if you want to feel the magic of this place and its starry night sky,» Martine says with a smile. «You’ll be received like one of the family at a generous table with a bottle of our wine. This place is sure to remind any traveler of home. If you like cooking with your friends and family or exploring new cuisines, or if you’ve ever wanted to talk to winemakers, who will share their passion with you, come visit us at d’Agel.»

Agel is a small village situated far from overcrowded beaches and tourist attractions. But anyone who has been here can’t stop talking about the «magic» of Agel, probably because it’s here where they felt for the first time how beautiful life can be.

Before saying goodbye, the owner of the castle left an autograph for our readers: «Welcome to Chateau d’Agel!»