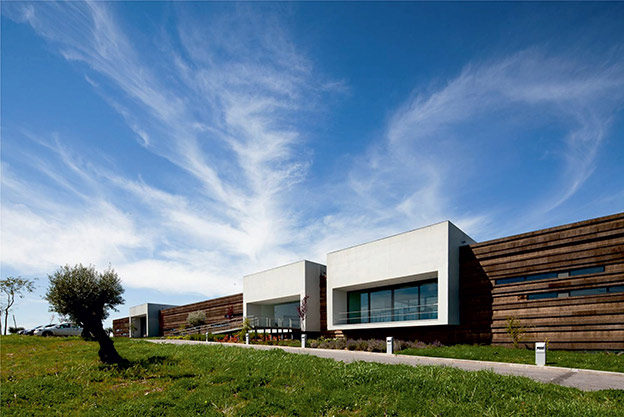 Casa Relvas is a winemaking company in southern Portugal in the Alentejo region. It is famous for its approach to making wines with an appealing price/quality ratio. This helps roll out excellent wines in the top and budget categories alike, which have every right to be considered the best wines in southern Portugal.

This family company was founded by Alexandre Relvas, a Portuguese public figure, in 1997. In the following years, Casa Relvas became one of the leading exporters of Portuguese wines to the global market, with up to 65% of its production exported. The company’s wines are supplied to 30 countries around the world, including the USA, Brazil, Belgium, Austria, Germany, Holland, England, Ireland, Angola, China, Russia, France, Korea, Japan, Mozambique, Cabo Verde, Namibia and the RSA. In 2018, the company’s name was contracted from Casa Agricola Alexandre Relvas to Casa Relvas.

The company planted its first vineyards on 25 acres of land on the Herdado de São Miguel farm in DOC Alentejo Redondo. The project’s goal was to showcase the character of wines of this part of the Alentejo region. Following the company’s development plan, one more winery, Herdado da Pimenta, was established later on. Today, the company owns two large wineries with a total area of 250 acres. 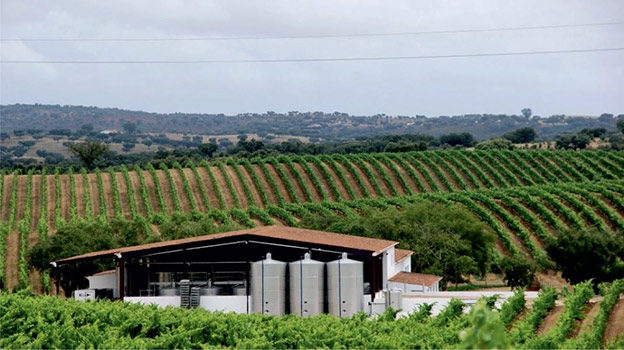 The company lives up to its philosophy of creating quality wines in all market segments, from everyday table wines to wines for special occasions. It strives to offer the best consumer price and bring out everything the Alentejo terroir has to offer. 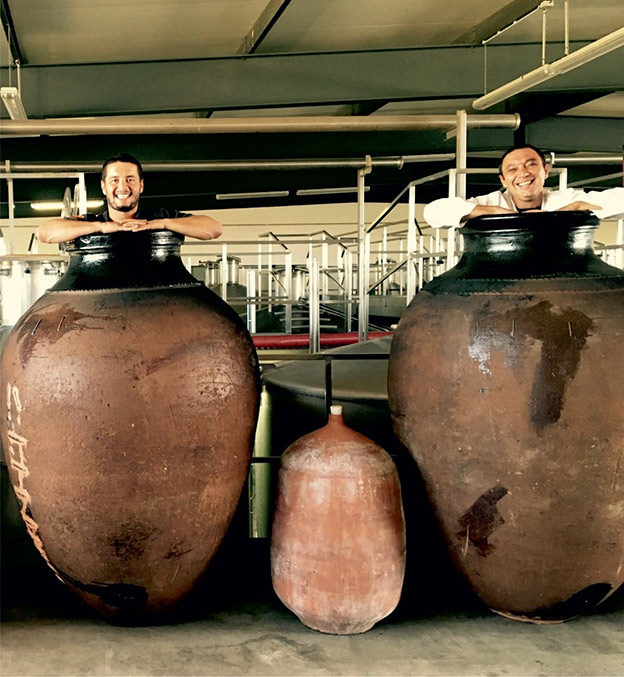 The Alentejo wine region accounts for nearly one-third of Portugal. The history of Alentejo winemaking dates back to ancient times. Wines continue to be made here during the Roman Empire, from which the region inherited the traditional technology of making wine in clay amphoras. This method is still used today by some wineries, including Casa Relvas.

Alentejo is the home of cork oaks, the bark of which is used worldwide to cork bottles. High-quality corks are even cheaper here than screw caps.

The region produces easy-drinking, full-bodied wines with fruity flavors that are bestsellers in cafes and restaurants around Lisbon. There are a lot of simple wines, but more refined versions are produced here as well. The following red grape varieties are predominant in the region: Aragonez (a.k.a. Tempranillo), Trincadeira, Castelão, Alfrocheiro and Alicante Bouchet.

White wine production in the hot climate of Alentejo requires exceptional cultivation skills, along with proper picking and laboratory work, so the region’s success in this area is quite modest. Antão Vaz predominates among white varieties with its good acidity, which is crucial in hot climates, and also with its tropical fruit notes.

As for the subregions of DOC Alentejo, we should mention Borba, Évora, Redondo and Reguengos, where most typical Alentejo wines are made as refined, balanced and easy drinking reds. Vinho Regional Alentejano wines are also made in the region and permitted to use international grapes showing excellent results. 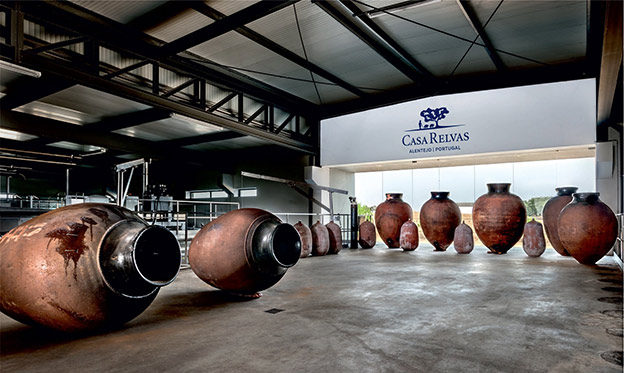 The company’s vineyards are located in southern Portugal in the Alentejo region, Redondo subregion. Flatland predominates in Alentejo, although there are some hills and mountains in the north. The soil types vary, from slate, pink marble and granite, to limestone and clay, which helps retain water. The vineyards are surrounded by cork trees and even cork groves. Clay and slate soil prevails here.

The main varieties, such as Aragonês or Trincadeira are local. General Portuguese varieties typical for the country’s winemaking in general are cultivated here as well: Touriga Nacional, Touriga Franca, Encruzado. International grapes are also used, including Cabernet Sauvignon, Shiraz and Alicante Bouschet, which is quite a bold decision for conservative winemaking in Portugal. But the results exceed all expectations.

Alexandre Relvas Jr. is the company’s enologist, while Nuno Franco is the production director and winemaking technologist. Alexandre Relvas Jr. says that «here in Portugal, we have an old tradition for blending grapes. We preserve this style, and the majority of our wines are blends of autochthonous varieties, but we also use international grapes. For our wine production, the art of blending and understanding what this blend will be like in a month, a year, or decade are an especially crucial, essential and exciting part of the process.»

The winery harvests its grape mechanically at night. When grapes are picked at cooler nighttime temperatures, their quality can be preserved to the maximum, helping maintain high production standards. For some wines, hand picking is also used. 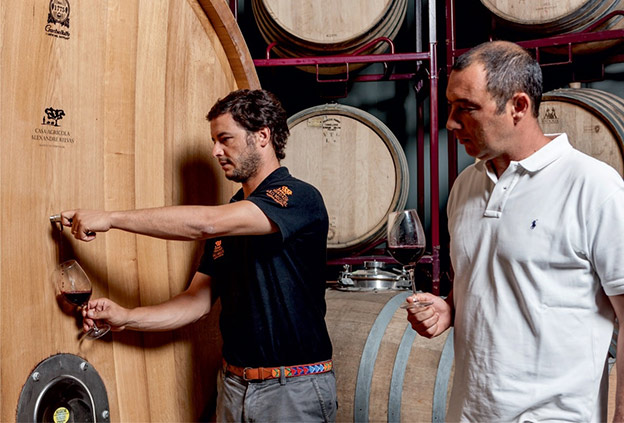 The company offers a varied lineup of wines showcasing all the terroir possibilities of Alentejo, Portugal’s largest wine region, and satisfying consumer demands in various countries around the world.

Two separate lines offer wine from one of the two wineries of the company: Herdado de São Miguel (where the company was first founded) and Herdede da Pimenta. Herdade de São Miguel Colheita Seleccionada wine deserves special attention; in 2016, it won the Mundus Vini gold medal. This wine is considered one of the best affordable Portuguese wines and has an exceptional price/quality ratio.

Ciconia wines, the name of which means «stork» in Latin, are also worth noting. Ciconia Amphora wine is the most exceptional among them. To make this wine, grapes are hand-picked and vinified using the traditional method of clay amphoras, an old technology used here since ancient times. The Herdado de São Miguel Art Terra line includes the best Casa Relvas wines made in amphoras. They are made exclusively from local grapes with a traditional vinification technology using stomping lagares and fermentation in talha amphoras.

São Miguel Missões and São Miguel Descorbidores wines are very interesting as well. These wines are created in honor of Saint Michael the Archangel, who is traditionally worshipped in Portugal as the protector of sailors, colonists and evangelists. 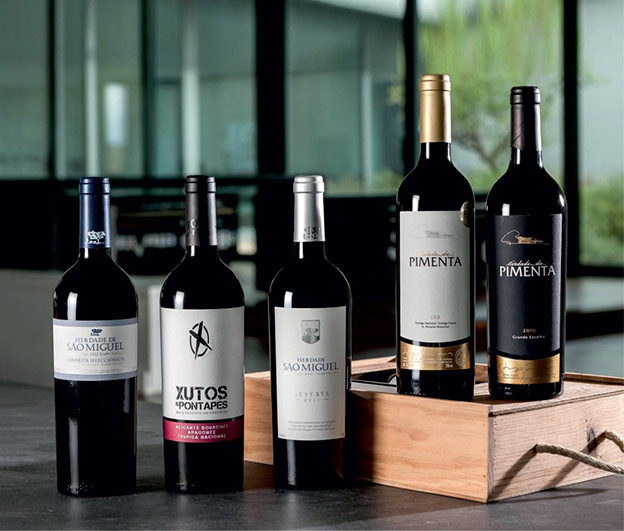 The Alentejo forest support project was launched in 2001. The company planted nearly 50,000 cork oaks on 247 acres. Later on, this area was increased to 1,500 acres. The cultivation of cork oaks significantly improves the region’s ecology.

The company also supports the population of a special autochthonous breed of Iberian sheep. Picturesque pastures are located in the midst of forest lands and vineyards. For six cold months of the year, sheep graze in the vineyards, which helps reduce the use of chemical fertilizers and cuts costs for mowing grass between vine rows. In summers, sheep graze in the cork oak forest, reducing the risk of forest fires in the dry climate.

This affordable wine can be considered the best among the Alentejo in Portugal in terms of the price/quality ratio among wines featuring international grape varieties. It is also the reason why this wine is not classified as DOC. But the classification of this wine as regional shouldn’t confuse you: it is a huge success on any scale.

It is fermented at a controlled temperature of 22–28 °C in stainless steel tanks. The wine ages in 400-liter French oak barrels for 6 months.

It has a rich ruby red color, and aromas of ripe cherries and plums. This is a full-bodied wine with red fruit, spice notes and vanilla on the palate. Supple tannins. Is best served at 16 °С. This is a gastronomic wine perfectly paired with regional dishes and Mediterranean cuisine. It is excellent with aged and soft cheeses.