Little has changed among the local traditions since the days of Homer, and nothing at all has changed in the local ways of winemaking since pre-historic times.

Colorful… fragrant… open… welcoming… Ancient Kakheti. The heart of winemaking in Georgia and its greatest treasure. You can only write about this place using superlatives, and even then all your descriptions will still be nothing more than a dull echo of its charming beauty. This is the land of wine. A land of silence, nature, and enchanting music. Vineyards are tended to everywhere here. Indeed, the cult of wine was born here almost at the same time humanity started organizing together. Since ancient times and up until today, wine and grapes have been the best friends of local citizens.

The Kakheti method of making wine dates back to the 6th-5th centuries BC, according to evidence from archaeological excavations in Southern Georgia near Shulaveri village. The essence of this original and unique culture of winemaking here lies in the fact that the fermentation of grape juice and wine aging occur in qvevri, or clay vessels buried in the ground. There are several characteristic features of traditional Kakheti technology we will cover below. 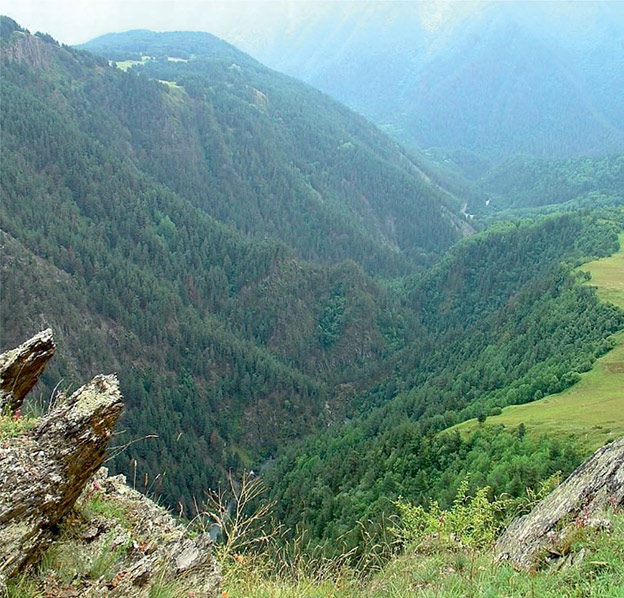 The song of Kakheti

The Kakheti traditions of winemaking are known around the world. People visit here to learn and breathe in the air, enjoy this land, this wine, and these unqiue people. Their lifestyle and everyday activities follow a certain rhythm, something so special that I dare call it love. Kakhetians are distinguished by their tender and selfless love to their land and culture. How can someone not love and respect the Kakheti for this?

Their name comes from the word «kakhi,» which refers to an ethnic group forming part of multi-national Georgia. The oldest layers of Georgian folklore stretch back to different sources; travelers can find pre-Christian shrines nestled high in the mountains, not to mention the numerous Neolithic monuments, local «stonehenges,» megaliths, menhirs, cromlechs, etc. It is an ancient land with thousands of years of history.

Archaeological finds show that wine here was used for cult purposes long ago. At one time, the Greeks, passionate lovers of wine, were active in this region. In Kakheti, Greek and Byzantine influence was marked by magnificent temples, and of course the use of characteristic devices for winemaking, which we will describe below. Some researchers consider modern Kakhetians descendants of the ancient Greek population, but this is a debated issue.

But almost everyone agrees on one thing: Kakheti and its Alazani Valley is the «winest» wine region in Georgia. The debates spark up again when we try to find out if Kakheti’s red or white wine is better. 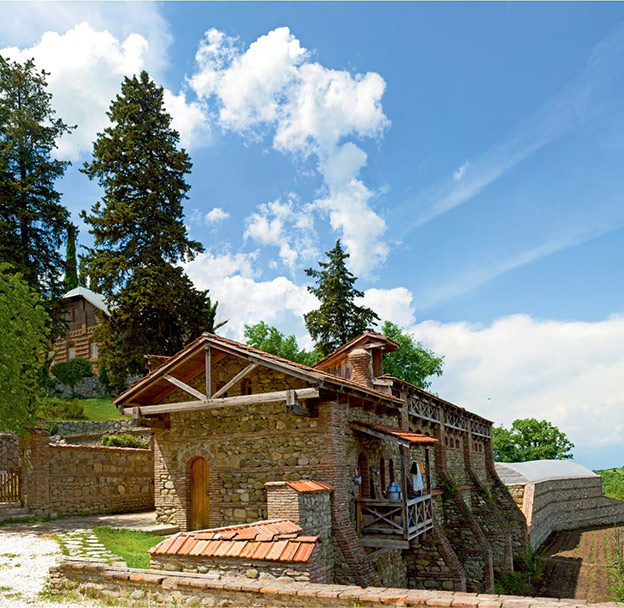 The grape harvest in Kakheti is traditionally celebrated as part of a big festival called Rtveli. Grapes are typically harvested during late September or early October. Late harvests here are considered more favorable, but sometimes they happen early as well, depending on what kind of wine is being planned.

Harvesting takes place during dry weather. Women often take part in cutting off the bunches. Harvesting is accompanied by friendly chats, jokes, and laughter… Children play nearby, delicious and simple food is cooked on an open fire…

The grapes are collected in buckets or special baskets called kalati. In these baskets, the Kakhetians carry grapes to large vessels called godori, which they place on arba carriages (a Persian word), and, singing songs on the way, they head over to the winery, or marani. By the way, the locals seem to have a song for any occasion here. 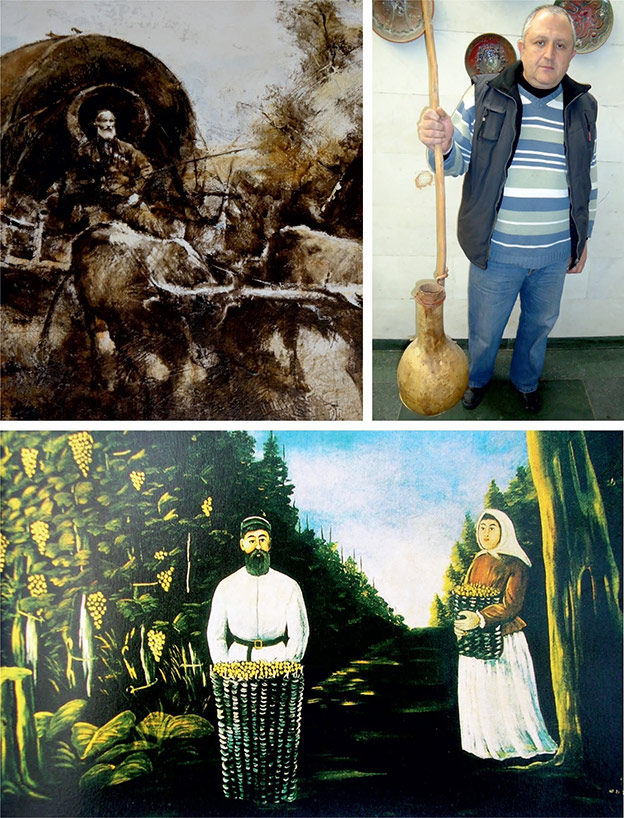 The song of marani

Marani is the sancta sanctorum, where the miracle of winemaking occurs. The marani looks the same as in old times, and the equipment for winemaking is often passed down from generation to generation. On the outside, a marani looks like a stone building with a very large entance and tiny windows.

The Kakhetians don’t always press grapes with their feet. Inside the marani there is in fact a press called a satsnakheli, or navi. This is an old device made from a whole piece of wood with carving on the inside. The bottom of a satsnakheli is sometimes covered with a plant known as gvimra. Closer to the bottom of a satsnakheli there is a hole through which squeezed grape juice, or tkbili, flows down into a special tagari receiver, and from here it is transferred for fermentation into the world-famous qvevri. 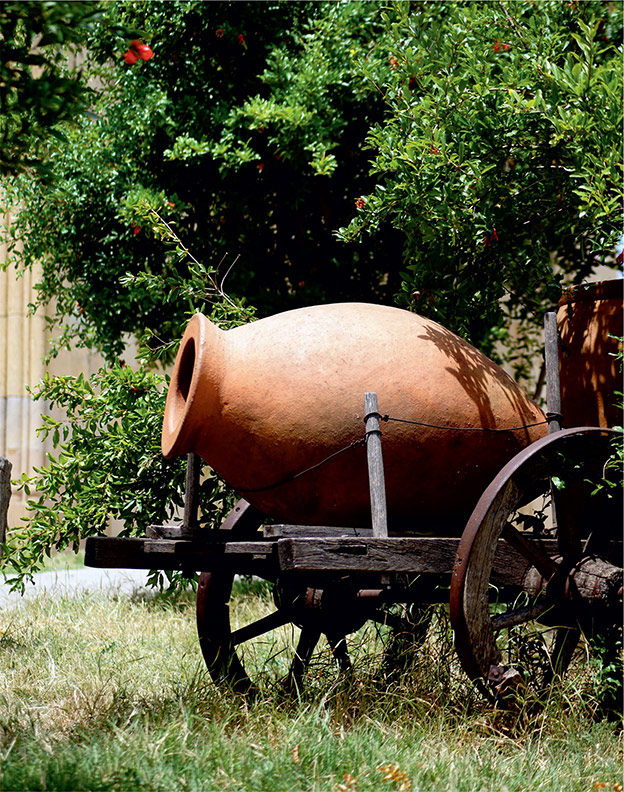 The song of qvevri

What an amazing land Kakheti is! Kakhetians are so sensitive to their traditions and respectful about their lifestyle, that they have preserved their ancient technology of aging wine in large clay tanks/jars… but wait! Georgians do not like to compare their qvevri to any other thing. They call them only qvevri, and no other name, to which they have every right in the world. Do you see many Roman doliums or Greek pithoi around these days? No, now they belong to the archaeologists, to the past! That means qvevri it is.

Qvevri are carefully buried in the ground, covered with stone lids and sealed. Old qvevri will then be stored, cleaned, baked, restored and used with love and care again. The natural temperature of the soil is enough to facilitate fermentation. By the way, qvevri can also have different volumes, from 50 to 3,000 and even 5,000 liters! 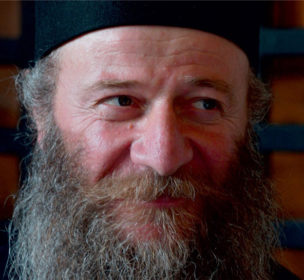 Metropolitan David of Amba and Alaverdi on Georgian feasts
In general, a Georgian man’s attitude towards wine is more of a complete lifestyle. Just as a man cannot exist without food, so he cannot exist without wine. A Georgian feast and food without wine is not a feast at all. We call the person who heads the feast a tamada (or toastmaster). The tamada is not only the person who pronounces toasts, but also blesses everyone who takes part in the feast. He says a toast to each participant individually, blessing and praising them. In addition to mentioning the participants of the feast, the tamada always also says toasts to bless parents, the motherland, children, ancestors, etc. This blessing with wine thus becomes a bridge between ancestors and future generations. Thanks to the tamada, the blessing passes over from generation to generation. It is very similar to a sacred liturgy… no, not similar, it’s just like it! It is a direct transfer, for just as the service begins with the praising of God, so does a Georgian feast. Everything is blessed during a feast, just like in the holy liturgy. Georgian feasts also end by thanking the Holy Mother of God, just like in a holy ritual. It also begins with praising God and ends with praising the Holy Mother of God. Therefore, feasts are also a sacred ritual for Georgians. The rest of the world doesn’t seem to understand why we say toasts, or why we sit at the table for so long. This is because we communicate together with our wine. This has been a Georgian tradition since anicent times: during feasts everyone drinks wine and says toasts to express what they feel. This is a custom for us in Kakheti: wine isn’t hypocritical, it always speaks the truth right to your face. By looking at the person who stands up and speaks, one can immediately see the way the wine influences him and the way he expounds in his speech. So wine is a spiritual joy, and this joy can be conveyed to others in a good toast or song.

The song of chacha

At the fermentation stage, Kakhetians add chacha (crushed berries with skin, pulp, seeds and some stalks) to the qvevri. This is done with both red and white wines. Qvevri are never filled to the top; the fill ratio is usually around 0.8. Then the contents are stirred well, and the wine is left to ferment. The fermenting mass is stirred 3 or 4 times a day. This process lasts for a week or a week and a half, depending on the weather and quality of the juice.

The grape particles rising in the process of fermentation are pushed down by stirring with a wooden stick split at the bottom 5-7 times a day, to prevent the surface of the so-called «cap» from getting sour. The optimal temperature during fermentation is 18-25°C; for intense fermentation, sulfur dioxide is allowed at a rate of 0.5 g per decalitre of fermenting mass. Quiet fermentation guarantees the maximum preservation of all flavors and components.

Under ideal conditions, fermentation lasts for 12-14 days. At the end of fermentation, the mass is stirred once again and bottled.

The fermented grape juice with hard grape particles (skin, stalks, seeds) then ages for another 5-6 months after the end of fermentation. Fermentation occurs using natural yeast, and once aging is complete (before the start of the warm season), the wine is poured out and stored again in qvevri.

Bottling takes place in the open. After this step, the technology differs for red and white wines. Red wines are «taken off» chacha and sent to spend the winter in qvevri to avoid excess astringency. White wines are then left with the chacha until New Year’s Eve, or even as late as February. The wine is then separated from the chacha using a special sieve. The chacha that remains after this step will then be distilled into the domestic alcoholic beverage of the same name. During aging, qvevri are filled and sealed with a stone lid and clay.

Here the hard grape particles sink naturally, and in qvevri tartrate salts and complex protein-tanate complexes in fact start form more actively. In addition, aroma-forming compounds form and accumulate quicker, which will be ultimately manifested in fruit, honey, and floral tones, along with nut and dried fruit notes in the taste of the wine. The wine in the upper part of qvevri becomes transparent, and the drink stabilizes naturally.

Chacha is also used to clarify wine. Winemakers wash it with wine and transfer it to qvevri. When the chacha sinks, it carries insoluble particles with it, thus clarifying the wine. 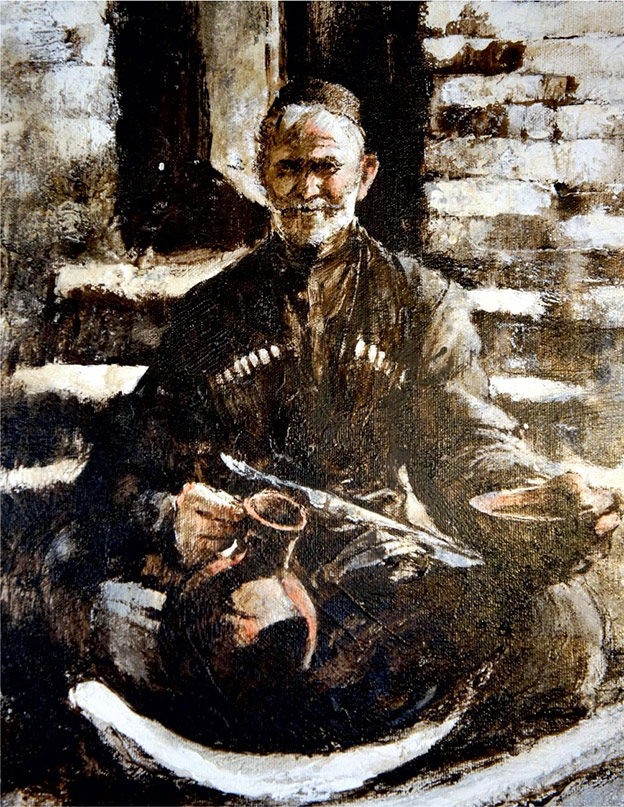 Good Kakhetian wine, or ghvino, is a healing nectar (ambrosia), which fulfills the ancient goal of winemaking: providing a connection between man and heaven. No more, no less. In conclusion, we would like to include several quotes from old and trusted works. Now let’s give the floor to the masters.

The Kakheti way of winemaking, which is very different from what is done in European, has managed to convince us once again that Georgia was famous for its high quality wines in the past, and will remain a trendsetter in the future.

Giovanni Dalmasso, President of the Italian Academy of Grapes and Wine (1949).

It must be said that, despite its tartness, traditional Kakheti wine does not at all give the impression of a coarse wine; it is easy to drink, puts you in lively, cheerful spirits and does not exhaust your body. Old, well-preserved Kakheti wines are distinguished by a special nobility and subtle taste.

Kakheti wines are a perfect match for the hearty feasts of Southern peoples. It is not surprising that a citizen of the Transcaucasus accustomed to them does not enjoy European wine.

Mikhail Gerasimov, Russian representative in the International Organization of Grapes and Wine (Paris), and chief winemaker of the USSR according some researchers.