The Templars and wine The Templar legacy in Portugal The Templars are one of history’s major and most fascinating Christian orders. They followed a difficult path from a great power to almost complete annihilation, but never sank entirely into the abyss of historic oblivion, as even today the order still has followers continuing on the legacy of their spiritual mission.

Heirs to the Celts and Cathars, the Templars had special attitudes to space and its philosophy, social organization, ritual, objects of power, beverages and the purpose of human existence in general. Backed by deep theoretical and practical knowledge (physics, chemistry, sacral geometry, metaphysics, etc.), they managed to create a powerful social structure complete with beautiful castles and impenetrable citadels in French Languedoc and Portugal, planted huge areas with vineyards and olive groves, and set up special rules and laws in these places.

Their deeds were to honor Christian values and notions, which the Templars thought contained a superior meaning, deep symbolism and knowledge. Therefore, no action of a Templar could ever be insignificant or accidental. This rule was attributed to wine as well, which was an inseparable part of the religious services and ritual gatherings of the Order. Red wine symbolized the sacrament of change into the blood of Christ and the effort of transforming the human into the divine. The Holy Grail related to the Passion of Christ was also an important symbol for the Templars. 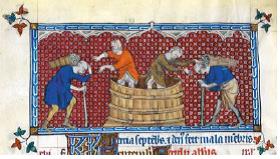 The Templars had a special attitude to grapes and winemaking, and always planted vast vineyards around their fortresses. They studied the processes of wine fermentation, ripening and storage, and its impact on the human body and mind. The transformation and fermentation of grapes were seen as an analog of certain chemical processes in human blood, and the process of enjoying wine was about observing the work of the mind as it stayed away from intoxication and transitioned to a state of inner focus in the search for truth and divine revelation.

The Templars played a special role in the development of Portugal as an independent state in the 12th century, while Portugal contributed to the development of the Order and preservation of its legacy during its years of persecution. Portugal was the first place in Europe where the Templars settled. In 1160, they built Tomar fortress in central Portugal (Ribatejo region). Indeed, it was Portugal that picked up the fallen flag of the Order after its annihilation.

In the early 14th century, the history of the Templars in France came to an end, but the Order continued to exist in Portugal, which proved conducive to its further development. Thankful for the help in fighting against the Saracen Moors during the Reconquista, King Dinis I established a new Order—the Order of Christ—with the official blessing from Pope John XXII in 1318. 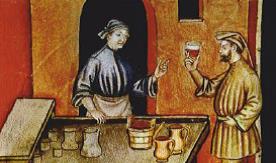 From its very start, the life of the Templars was strictly regulated by codes, while each preceptory always strove to maintain considerable autonomy.

The regulating document of the Order was its Code (La Regle primitive), which was approved at a synod in Troyes in 1128. Later on, it was extended and received a more detailed interpretation in three additional documents: the Primitive Rule (Retraits), Hierarchical Statutes (Statuts hierarchiques), and Penances (Egards). The rules defined all aspects of life of the Templars in times of peace and war. Aspects of nutrition and consuming beverages were also stipulated.

Beverages were used in three ways: with everyday meals, during religious services and for carrying out rituals. Wine was the most commonly consumed beverage, but when the climate was not conducive to growing grapes, it was replaced by beer or ale. Wine was often mixed with water, and various spices (anise, rosemary, cinnamon, cloves, etc.) or honey were also added to the mixture.

The Templars did not tolerate excessive alcohol consumption. If caught drinking too much or abusing alcohol, people were punished and even expelled from the Brotherhood. «…And if the brother is used to drinking so much that he gets drunk and refuses to improve, he should be punished,» according to the Catalan code of the Order (one of the versions of the main order). 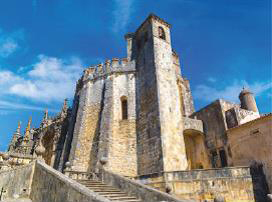 Each Templar preceptory usually made their own wine and developed special technologies for winegrowing, production, storage and consumption of this drink.

Every member of the Order had two wine goblets: one for everyday meals, and one for rituals. Much attention was given to the manner of eating and drinking; movements of the Knight Templar had to be precise and elegant. This rule was applied to cutting cheese, bread, fruits, as well raising a goblet with wine and drinking it. During the meal, no conversations were allowed so brethren could focus completely on the taste and perception of the food and beverage, uniting it all with a prayer.

Thanks to their strict eating rules, special diet and sanitary conditions (a separate clean table, hand washing, thorough treatment of food products), the Templars lived long lives compared to the rest of the Medieval population. Seventy or older was typical for monks.

In Portugal, we can still see in the legacy of the past how important the grape vine and wine were for the Templars. The architecture and finishing of churches, for example, the Tomar fortress mentioned earlier, features many references to symbols and signs of great importance for the Order.

The Charola Church, also known as the Rotunda of the Templars, is a magnificent sixteen-sided tower with arrowslit windows and buttresses. They designed the octagonal shape of the altar in the exact style of the Edicule of the Church of the Holy Sepulchre of Jerusalem. On the inside, the church is a true alchemical reservoir filled with numerous symbols. This is where their religious and ritual services were held, their hymns were heard, bread and wine shared, and mysteries of the body and soul witnessed. According to legend, the Holy Grail and countless other treasures of the Templars might be stored here.

Once every two years, the Tabuleiros Festival is held in Tomar. Four hundred young girls parade across the main square carrying high stacks of bread, fruits and flowers on their heads. During this celebration, consecrated bread and wine are handed out to guests and locals for free. This tradition was first established by the Templars.

The Templar legacy in Portugal today

The Templars were a closed order, so the only way we know of its goals is thanks to the drastic changes they left behind in science, banking and architecture in Europe. Even in the golden age of the Order, only a few European monarchs who interacted with the Templars knew their real goals. The papacy was always their principal curator.

The legend that the Order was yet another military of the Pope was made up by the Templars themselves to distract attention from their real progressor purpose. Today’s world has shown that progress, new ideas and technical developments require massive investments. In just a short period of time (in terms of global history), the Templars transformed Europe and the art of war.

After ancient Egypt, they were the first to introduce consolidated laws of energy and physics (or «magic,» as some might say) to European culture. As time went on, with its power and wealth, the Order ignited the envy of the people in power, and was destroyed together with most of their documents. Today, we remember the Templars mostly as the order of Knights in reference to their military campaigns.

The Order has a specific heretic fame, so officials in the countries where it was most active do not like discussing this topic. In Portugal, we have strong administrative support, but only in a private way. Any disclosure of names or official positions might be harmful to their reputation.