Crystallic Nutrition, or Law of Grapevine

World of Wine :: The Way of Wine :: Crystallic Nutrition, or Law of Grapevine 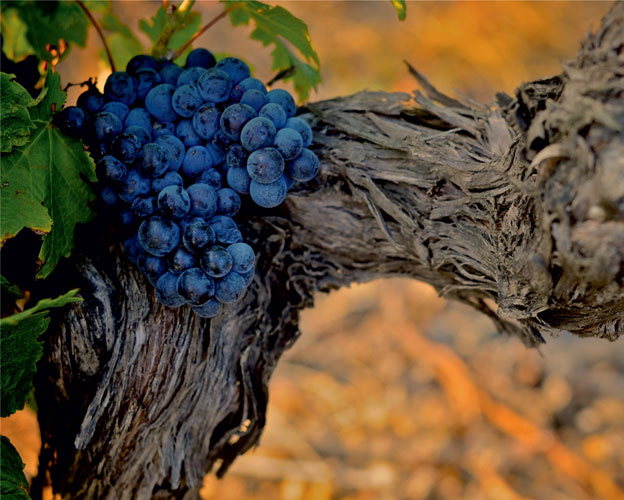 Not many pay due respect to the laws of wine aging in regard to the mineralization, while it is the minerals that the vine actually feeds on! How a wine turns out depends a lot on the composition of the soil. And the age of the vine, while influencing the taste qualities of the wine, leaves the biggest imprint on its power and wholesomeness.

Wine made from grapes that grew on vines younger than ten years is basically not wine enough. It is full of emotion and joy, but it is not yet stable or powerful. Such wines should be drunk at the place where the grapes grew, thus I would call them autochthonous wines—not by the variety name, but by the law of the place.

The root of such vine has strengthened only in the upper layer of the soil and is not yet saturated with minerals. Such wine cannot be kept for a long time, and its power is only nutritious at best, and even that much provided that the wine was made according to all the laws of winemaking. Otherwise, it is a mere alcoholic drink that fools the consumer.

Wine mineralization usually begins when the vine turns 15, although, of course, much depends on the soil and grape variety. Rarely earlier, though. In Bordeaux, vines aged ten are considered to be sufficient. So, if you come across a cheap Bordeaux wine, it probably comes from a vineyard that is not yet mature enough for proper wine.

In fact, there exist two different wines for consumption: one coming from young vines, where alcohol dominates, and the other from mature ones, where minerals dominate. The former is inebriating and pleasing, and the latter akin to crystalline nutrition. Considering that wine goes straight to the blood, and the blood rushes to the brain, what is really going on is a matter of guesswork.

It is impossible for a person to perceive ions of minerals directly, as they have no distinct smell or taste, but any wine with a rich finish is the work of minerals. The vine absorbs minerals from the soil as a result of organic decomposition, and it is its main nutrition source. Now, at a mature age, say, 40–50 years, the root becomes able to bind to the crystals, as it itself is already full of minerals of organic origin and is by then much like a crystalline cluster.

And then there is also photosynthesis, an amazing, even miraculous process whereby not only leaves and berries interact with the sun, but there also is a resonance in the absorption of solar energy by the minerals that become enclosed in the vine upon it reaching the proper age. 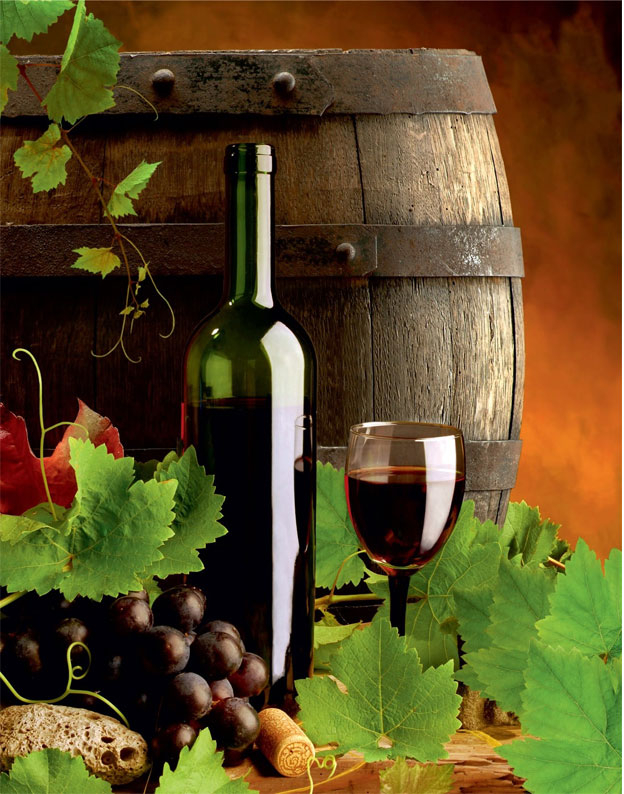 The grapevine is what the ancients not only used for winemaking but also believed to be tied to an early god, then called the Viticulturist. Basically, the vine was compared to human nature as a whole, and the wine coming from it—to blood. An ungrafted vine can live very long, or even forever if we bracket the fruiting.

Under normal conditions, a vine yields grapes until it is about 150 years old. The yields become smaller with time, but the power and quality encapsulated in the grapes improve. The most interesting thing takes place later. The vine’s lifepower goes down in the ground. The root gets packed with minerals to a point where the vine turns into a crystalline body. Essentially, the vine does not die. It discards its trunk and leaves and transfers to another form of existence, demonstrating the supreme nature of being to us. And surely you understand the value of wines made out of grapes that grew on vines older than 30 years.

However, I can assure you these wines hardly ever makes it to the market. Perhaps only in Georgia, where 500 varieties of normal vines, i.e. natural and indigenous, grow. And unless they kill their soil with all kinds of inoculated Merlot and Cabernet vines and production volumes, Georgia will still be our only hope and the place where the law of the vine is upheld. In the rest of the world where hybrid vines abound, it is rarely possible to find a vine older than 40 years.

Different grape varieties require different soils. Therefore, autochthonous varieties make more than just wine: they are a manifestation of the power of their land. Obviously, soils and varieties have been long matched by now, and in many countries, particular grapes have attained a status akin to autochthonous. I.e. Shiraz in Australia or Malbec in Argentina. In turn, Cabernet Sauvignon is the stuff of legends: its ability to grow everywhere due to the sheer strength of its root has become proverbial.

The soil is much like ethnicity for grapes: chalks of Champagne, granites for Beaujolais, or quartz gravel and sandstone for Bordeaux. Yet, whatever the soil, proper wine comes from a vine that is constantly kept sharp, that is in the state winemakers call stress.

That is similar to how a person can achieve a lot if they know how to stay sharp, or life itself keeps them on their toes. The vine should not be relaxed or lazy, but rather it should have strength. If a vine takes root on a soil that is less than perfect for winemaking, it will fight for strengthening itself.

This means one should not always see vine merely as future wine to fill one’s glass. It is a plant that also fills the soil. When vineyards are uprooted, the soil takes its time to recover for new plantings. But in fact, this soil is already an uncommon one, with its characteristics already changed. If a grapevine root was allowed to form in it, maybe we would later find mineral deposits in it, or, say, cypress trees would grow there. These are speculations, of course, but if a wine can still be gaining strength 100 years after being bottled thanks to the same mineralization we are talking about, why can the root not do the same? The answer is, it is just never allowed to.

And let me ask you this: Do you know where the power of Georgia lies? In its proper roots. Even mass vineyard destruction during the savage years was never able to destroy the land of Georgia. For thousands of years had this land been imbued with grapevine roots, just like every Georgian native. The structure of the land affects not only the quality of the wine but also the people living on it, and this is something to remember.

To love the land… This should be not mere words, but rather a philosophy of human existence. As a French winemaker told me once, he finally understood how wine is made when he started feeling the soil. And that happened after he had turned 50! It took a life of fifty years, lived in the winemaking heartland. To feel the soil is to taste the soil. And the taste of the soil is the minerals in it. Interestingly enough, this nutrition is very important to grapes, as it is with the help of minerals that they then feed on the energy of the sun. They do not need watering, added nutrients, or even being cared for. None of that matters to the vine. It is important for the wine, though, and that is what vines are nurtured for. But it is precisely because of the primeval life conditions that Georgia, Montenegro, Serbia, and Russia have been able to preserve their autochthonous varieties. Now imagine if those grapes had been turned into cultivars some 30 years ago. They just would not be around by now!

But it was not the case, so you can now enjoy Krasnostop, Tsitska, or Vranac. Naturally, the grape business wheeler-dealers will never leave any room for anything natural and genuine these days, but you have Code de Vino to help you find your way in the chaos that is the destructive and harmful alcoholic drinks industry. The vine is a person’s first teacher. And the highest state a person can aspire to is to live by the law of the vine. Macrocosmic laws, called biodynamics in winemaking, must not be disregarded. That said, true biodynamics lies in following the law of the vine, which can deal on its own with the soil, light, and water—everything that a terroir comprises. Consider this: most wines these days are similar like a row of soda cans. They are faceless, even if expensive. And the sulfur used for conservation, while not a bad thing when used reasonably, imparts a similar taste to the bulk of commercial wines.

Wine manipulation has long made wines akin to cocktails and punches to make them ever so slightly different from the rest or sugarcoat the flaws, but could those even be called wines, at the end of the day? Would it not be better to give the vine proper nutrition instead of ravaging it and the soil it grows on with chemicals?

It may come as a surprise to some, but wine is food first and foremost. That is if we are talking about wine able to crystallize and change its internal tension, of course. Today, such wines include aged wines coming from old vines and crystalline wines made with the use of crystals.

Amazing as that may seem, wine itself can be nourished if you properly understand its power and know what kind of crystals it can consume. Naturally, this is much like many other winemaking tricks, such as adding honey with most being unable to feel it, let alone the blasphemy of adding sugar, legal in certain quantities in France.

However, the most important thing is that the crystalline structures in wine are fully absorbable by the body—if taken in regulation, that is. Any kind of overeating is harmful, especially when we are talking about high-quality nutrition where even vitamins and amino acids are not so important as the tension is. It is similar to charging yourself like a battery. And the key thing here is the ability to recognize the wine’s mineralization level. Riesling would make a good example here, at least five or, even better, ten years old, where the mineralization not only gives off a note akin to gasoline but can be felt by the body. German Rieslings are the best for this purpose.

Tasters detect such wines by their acidity and saltiness. However, the most interesting thing here is the interaction of pH level with minerals. If the pH level is low and the mineralization poor, the oxidation process intensifies, which could be harmful to the blood. The same is true for water, rated by its pH formula and mineral structure. Naturally, water takes a longer and more complicated process to be filled with minerals. And here we have a grapevine root vine, functioning like an alchemist’s workshop, where the sacrament of transformation and making takes place. But it is a controlled sacrament.

A drink’s oxidation level is not so much important to its qualities as it is to our body. By drinking something improper, we burn ourselves instead of nourishing. Usually, white wines are characterized by their mineral content, as in those, the taste of tannins is not overpowering. Moreover, red wines are protected by sulfur dioxide preventing them from oxidizing. Attempting to subsist on wine, we can come across certain unfinished, extrinsic processes. A consumer who is used to drinking European wines is, to some extent, indoctrinated to enjoy those. Such a person should pounce at the first chance to go to Georgia and experience a tour of wine obedience—say, in Alaverdi Monastery. 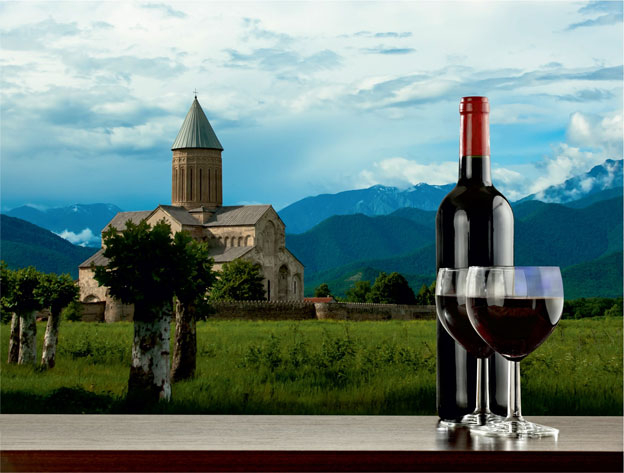