A wine blessed by the sun! This is how people talk about wines from the Holy Mount of Athos. It is a very special, unique place considered to be under protection of the Mother of God herself, located in northeast Greece on the Chalkidiki Peninsula, Central Macedonia. Monasticism started here more than a thousand years ago. The 20 monasteries of Athos form a single Orthodox community, which still maintains its own system of management and special rules observed throughout the area. The Epifanis wine that the monks of Mylopotamos monastery make entirely on their own is incredibly powerful, crystal clear and simply stunning—it is a wine to help connect with God! 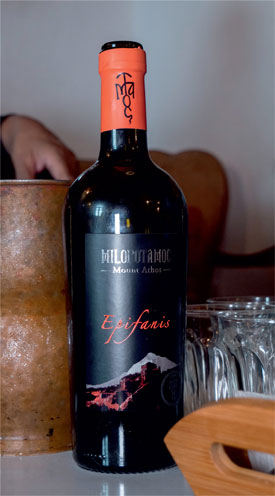 Like an old vine wrapped around the trunk of a large tree, winemaking has been tightly entwined in Greek culture since ancient times. Its uniqueness can be best seen in its potential, which is formed thanks to centuries-old experience allowing the Greeks to combine ancient traditions with the latest tendencies.

Here, they prefer autochthonous grape varieties to form an infinite palette of different kinds of wine. There are at least 300 local grape varieties, including Asirtico, Robola, Xinomavro, Savatiano, Moschofilero, Agiorgitiko, Limnio, Mavrodafni and many others. But none of these names really rings a bell for anyone who has never visited Greece, since at the moment, local wines don’t boast wide international fame or general acknowledgement. Or perhaps, the Greeks are just keeping this treasure for themselves, and simply prefer hiding it from strangers?..

It isn’t quite clear at first sight what valuable lessons we can learn from these unique tasting and sometimes even quite rough wines, that have been being made since times long passed. In Ancient Greece, wine was an obligatory part of any meal, alongside bread, olive oil, water, and salt…

And their wine wasn’t at all like the wine we are used to drinking today. On the other hand, this can be explained by the fact that the purpose of wine back then was much different. Wine was fermented over a longer period of time together with grape skins, which provided a higher alcohol content, thickness and intensity. Instead of classifying wine into red and white, the Greeks distinguished three types: sweet, dry, and light wines. Sweet white wines were among the most loved and precious. They are distant relatives of modern amber, or as they are sometimes called, orange wine. They got their color from long periods of ageing and high temperatures during storage, causing oxidation.

Greeks often added salt, chalk, clay, honey and even resin into wine to act as preservatives. In fact, these wines can be called concentrates or essences. Greek doctors of the past often prescribed that kind of wine to their patients to restore strength and cure illnesses; travelers and warriors took it with them into long journeys, as just a tiny amount of it was enough to disinfect a large volume of water. More concentrated wine was served at meals and during philosophical debates.

A typical Greek breakfast consisted of undiluted wine and bread they soaked it in. Not a typical start anyone is used to today, wouldn’t you agree? Sea salt was added to sweet wine to enhance its sweetness. Interesting fact: the Greeks stopped fermentation by adding boiled milk to wine.

Winemaking traditions of Ancient Greece provide us with such methods and technologies as removing part of the leaves, turning the grape bunch over to increase its sugar content, and slightly late harvests to dry the grape a bit on the vine. Even back in those times, winemakers were very careful in their use of fertilizers, as they knew just how much they can affect the aroma. Small amounts of sulfur were used only during certain production stages. For instance, clay jars were fumed with sulfur before filling them with wine for fermentation.

At the moment, quality control regulations for wine in Greece include the requirements imposed by the EU. There are two main categories of wine: Table wines (TW) and Quality Wines Produced in Specified Regions (QWpsr). The latter, which is reserved for wines of a higher quality, includes wine marked as VQPRD (same as QWpsr) and DOC (denomination of controlled origin).

There are about 30 appellations of origin, each with its own typical grape. Some modern technologies have their roots in the winemaking traditions of Ancient Greece. For example, the famous Retsina wine is made with the addition of pine resin. Xinomavro prevails in Macedonia, Epirus is famous for its white Debina variety, and many islands also cultivate their own types of grape. Winemaking in Crete, for example, is famous for its Malvasia, and Lemnos continues to grow Limnio, the main variety used to make the monastic wine Epifanis.

Wine of the Athos Monastery of Mylopotamos 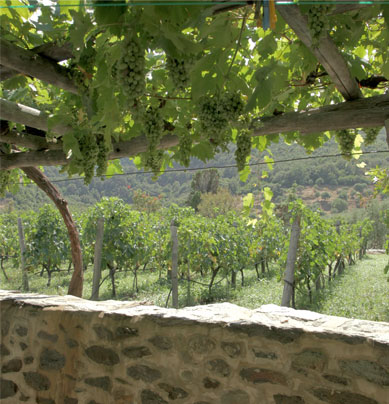 Monasteries in Greece began to produce wine as early as during the Byzantine period, almost simultaneously with when they were founded. It was an important component of both religious services and everyday meals.

The Holy Mount of Athos is best known for its organic wines, Epifanis being just one of them, made as a joint effort with the monks of the St. Eustathius monastery in Mylopotamos. This small monastery is part of the Great Lavra.

The vineyards in the Mylopotamos skete were started over 1,000 years ago at the time of Saint Athanasius of Athos, who first founded the winery, as well as an oil press farm for his freshly planted olive trees.

Many historical sources over the centuries have praised the wine of Mylopotamos for its exceptional quality. It was the first skete on Athos that began to produce wine not only for internal consumption, but also for sale in Greece and other countries. Production volumes here reached from 60 to 80 tons per year at different times.

At the moment the vineyards of Mylopotamos occupy an area of 50 sq. km, where the monks cultivate Merlot, Limnio, Cabernet Sauvignon, and Muscat of Alexandria and Assyrtiko. The monks conduct operations all on their own, from cultivation to production of the final product; their supervisor is the famous Father Epiphanios of Mylopotamos. 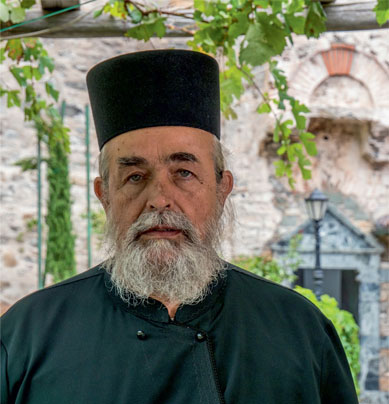 Father Epiphanios (or Epiphanius) is one of the most well-known monks on Mount Athos. He spent many years in Saint Paul’s Monastery on Athos, and in 1990 he moved to Saint Eustace’s skete in Mylopotamos.

Father Epiphanios is a winemaker, expert and ambassador of monastic cuisine in Greece and all over the world. He has even written a cookbook of traditional Greek recipes (part of Mediterranean cuisine).

His mission is to spread the knowledge of dishes, which have been being cooked in this area for centuries, and can help you become healthier and more mindful. This is the philosophy of the monastic cuisine of Mount Athos, which excludes red and white meat but is rich in vegetables, seafood, and fermented drinks.

According to Father Epiphanios, everything in the culinary arts is an expression of love towards those you want to express gratitude towards. And this wine reflects this principle perfectly, as it is perfect for both Communion and pure gastronomic pleasure. 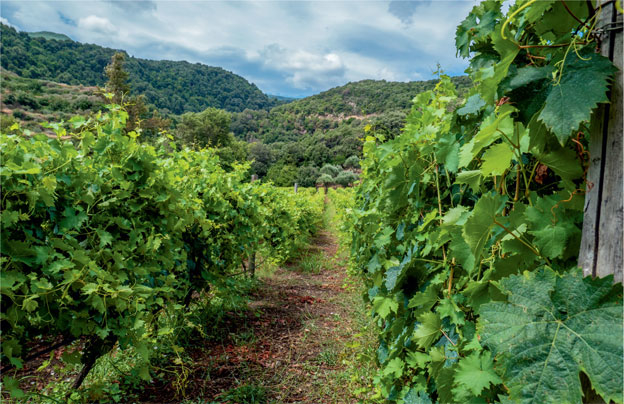 The vineyards of the skete are situated at 100 meters above sea level. The soil here has a high sand and clay content, so the grape receives the necessary nutrition and fully ripens. The climate provide enough rainfall throughout the year, and coupled with the coastal climate and decent number of sunny days, this creates ideal conditions for obtaining the finest quality grapes.

The grapes are harvested in early September. Monks here use exclusively organic methods for cultivating soils and growing grape. It is only logical that in a place where calm and tranquility are the standard, they won’t tolerate anything that would interfere with the natural course of events. 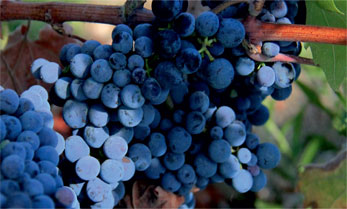 Limnio is a rare autochthonous variety cultivated in Ancient Greece. There are mentions of it in Ancient Greek literature. Today, it can be found mostly in Northern Greece. It was named after the place where it originates—the island of Lemnos, where it is cultivated today under the name Kalambaki.

The most interesting wine from this grape is made in Chalkidiki (Macedonia) and Maroneia (Rhodope regional unit). This variety is mostly used in the production of blended wines, where it shines forth with its accents of fresh herbs, red berries, moderate acidity and velvety tannins.

The second grape in this wine is the well-known and beloved Merlot. Here, it gives a bright shade to the wine and fruity accents.

Mylopotamos uses a classical approach to vinification. Grape juice is fermented for three weeks at a controlled temperature, after which the wine ages for 24 months in French oak barrels. This results in a wine with the high acidity of 5.4 g/l. Harvesting, vinification, fermentation and ageing all take place directly in the skete.

The wine glitters with a pomegranate color in the glass, reflecting not just the color, but the essence of the wine as well. It is purity you can pour in a glass. The wine has an excellent, persistent astringency and pleasant bitterness, which unfolds with a soft sweetness in its long aftertaste. This matrix wine fills and nourishes the body, clears the minds and adds strength with each sip. Vanilla notes fill the glass with light strokes at first, gradually getting more and more confident, and ultimately transforming into a frankincense aroma connecting the drinker to the divine. 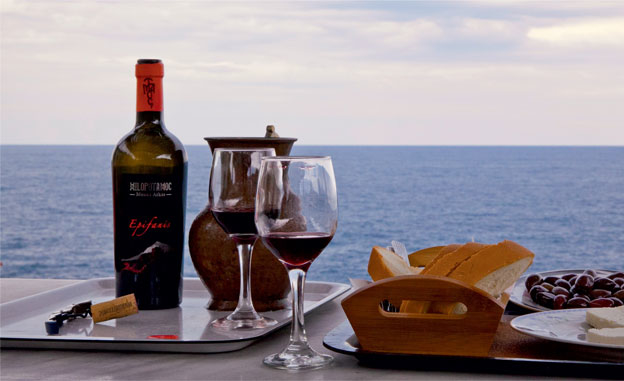 You can uncork this wine now, or let it hone all of its nuances, align and sharpen all of its notes of flavor and taste for another 5-10 years.

Despite its five-year-old age and grape varieties suitable for drinking young, Epifanis is only at the very start of its evolution. After a few more years the acidity balances out, the tannins get more rounded, and the wine’s inner strength and pleasure you get from drinking it only increase.