Without the right food, humanity has no future.
Stefan Wiesner 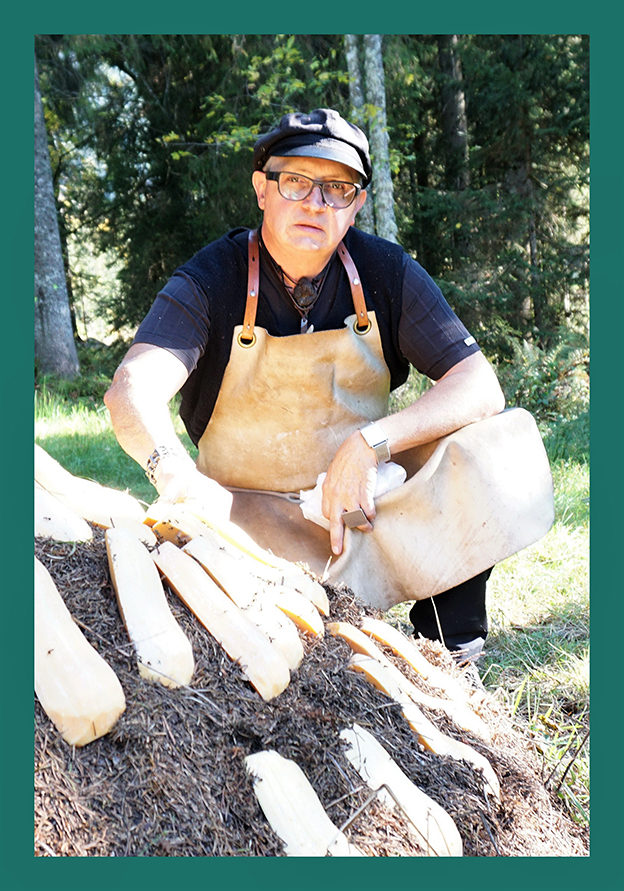 In a beautiful corner of Switzerland, in the town of Escholzmatt nestled in the Entlebuch biosphere reserve between Bern and Lucerne, lives and works Stefan Wiesner, a.k.a. The Wizard of Gastronomy. If there is one restaurant in the world unlike any other, it’s got to be Stefan’s Gasthof Rössli.

There are countless epithets used to describe haute and traditional cuisine, but its easy to feel at a loss for words when experiencing the unique art and magic of Stefan Wiesner. He is a true alchemist in the kitchen, although he calls himself an anthroposophist driven by self-development. To him, cooking is a spiritual experience. His kitchen is guided by the concept of «spagiria,» the ancient science of uniting and dividing the spirit, body and heart of different ingredients, separating the wheat from the chaff and ash from the body in the circle of alchemy cuisine.

«Say we need a pear,» Stefan says. «First, we need to go to a pear tree and ask the pear spirit. Then we use coal for distillation to obtain a special kind of vinegar or foam from the coal distillate. This will give a special texture to our food.»

He believes that a person must nurture their spirit above all else. That coal isn’t just a body of food — it’s a taste, a neutralizing agent for harmful processes. It is essential to minimize or eliminate destructive processes in food (for example, if we cook with minerals, stones, slate, etc.).

The process of internal absorption is essential because it helps our body digest energy and receive the essence of food, instead of just its body or mere volume. There must be something to bind food into a singularity and seal it, be it a mineral, rock or coal foam. Chefs must create a positive space in their dishes and give their food depth.

It’s of paramount importance in this process to practice 3D thinking, not just superficial perception. Thoughts must be deep, not wide. Tune in to each dish. Creating a menu should be akin to staging a play, with its climax, anticlimax, pauses, etc. Such a work can be dramatic or lyrical. It can even have an epigram if we serve a dessert from rock or lava. Or perhaps slate ice cream? In gastronomy, you can create a hymn to good food that might incorporate elegiac and lyrical elements, joy and even sadness.

«For me,» Stefan shares, «cooking is a message I can fill with different content. It’s divisions come in different forms. A menu might consist of five acts, like the Roman patricians, or without a clear break, like the Ancient Greeks. Today, the most popular is the Spanish model, which usually separates a menu into jornadas — a first, second and third act. But I’m not a big fan of this. There can be many acts. For example, my current Land Rover menu features eight acts. My previous menu named after esteemed composer Alexander Skryabin included six dishes, or six mysterious chords,» Stefan explains.

To interact with the spirit of food, to tune into it, is done not for the chef, but for who ultimately consumes it. Food tells us a story. It’s a series of works or a book.

To realize the power of food,
And forge ourselves like steel,

Nurture our body with a meal,
Enjoy and let it reign on us.

Of course, food is first and foremost a form of intelligence. Experiencing Stefan Wiesner’s unique cuisine is like taking a class on aesthetics, symbolism and the philosophy of Kant or Schopenhauer. It encompasses principles of Buddhist teachings and meditation, where Stefan (like the monks who create sand mandalas) glides from one menu to another, abandoning the old. Land Rover has thus taken the place of Alexander Skryabin.

It is difficult to imagine that today’s victims of fast food and pizza are capable of perceiving Stefan’s original style. Only a select few can enjoy his art because his personality is closer to that of a guru or mentor, whose main contribution isn’t as a culinary master (like the great alchemic work of Paracelsus), but as a teacher in the art of experiencing a mystical process.

Not many people these days are interested in classical music. Most come to a restaurant just to dine. Stefan’s futuristic, or molecular gastronomy (as it is now known) defies trivial everyday concepts and explanations. He represents a special case lacking any ready comparison. The only association I can think of is Nikola Tesla. Stefan Wiesner’s gastronomy is based on alternating current and multi-phase systems, where he either generates food synchronously or asynchronously, driving it into the deep. Just like Tesla, Wiesner came up with his own food measurement system. Let’s call it Pc.

1 Pc is the minimum amount of food that can be digested without losses damaging the body, and has a power characteristic like a magnetic field. It is crucial to understand how deep we can go in an attempt to explain such a unique individual as Stefan, a man who creates consecrated food on the principles of the supreme. The way Stefan works closer resembles a sacred ritual in a temple than what typically unfolds in a kitchen. But this is not surprising, as his approach to cuisine does not suit food «troglodytes,» even though, as he says, he often has to face them every day.

He whips up a consecrated marriage between our brains and his cuisine, where everything is based on the power of food and its taste, not its body. It is an act of creation in which he connects worlds. He cooks power, and when the marriage is consecrated, i.e. when we have consumed his food, he brings in his bread, original and one of a kind, symbolizing resurrection or the end of an episode. At this moment, you forget everything that came before because it is no more than a prelude, even though a few moments ago you thought you were at the peak of pleasure…

The curtain falls. You’re still in your seat, as in this short period of time, a new order based on excess has taken root atop the ruins of the old. If I may, Stefan’s cuisine allows us to connect to the divine nature of the alchemic kitchen. The actors of this play will change your life so much you won’t even be able to recognize yourself. 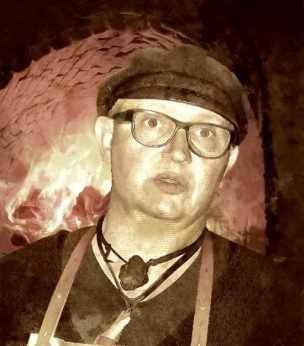 Stefan wants his food to make people happy and grateful. He cooks for people who think deeply to help them perceive all the dimensions of taste.

However, Stefan’s gastronomy avoids the esoteric, thanks to his expansive knowledge in multiple areas, including mathematical thinking, taste in music, and perhaps most importantly, his incredible focus. For superficial people, it is easier to serve chocolate ice cream than expect them to perceive the sacred depths of gastronomy built on the golden ratio.

Stefan Wiesner’s gastronomy is a play that lives its own life. He does not cook the same things for years like haute cuisine demands of him (to garner recognition and reproduce the same dishes over and over). Instead, he transitions from one work to another.

According to Wiesner, haute cuisine is like a three-star hotel. None of his culinary masterpieces live for longer than three months. Soon his Land Rover gastronomy will be replaced by Paracelsus. If you missed one performance, you will never get another chance to see it. Today he tells the story of the Land Rover, the beloved car of thousands of farmers since 1948, for whom it served as both tractor and truck. Land Rover dethroned Alexander Skryabin’s powerful chords. One masterpiece of flavor supersedes another, and now reigns the mysterious chord of Land Rover.

It is clear that such a chef cannot limit themselves to just one cuisine. He needs a school of supreme taste, an academy of unique thinking. In fact, he estimates the project at €25 m to bring the school of depth gastronomy to a whole new level. This institution would teach students to strive for perfection instead of constantly recreating what already exists. Understandably, this project is impossible without aid from generous patrons.

Above all else, Stefan is a practitioner. As he explains, this is why he stopped earning Michelin stars, the mark of quality in the world of haute cuisine. His mission is to create new food, not improve the old.

Of course, his refusal to fight for Michelin stars makes Stefan unique even among the most outstanding gastronomic masters. To achieve perfection in himself and his art, he adheres closely to his path. His kitchen is a laboratory, which needs to be properly staffed.

For instance, Stefan uses a mathematical model based on the Fibonacci sequence to solve practical issues related to any matter in his life, be it gastronomy, his restaurant or school. Fibonacci figures and the golden ratio form the foundation of Stefan’s gastronomy, his principles of creating forms and the optimal human perception to experience beauty and flavor.

Ultimately, Stefan’s boutique cuisine is a system and philosophy of depth, where you can hear, see, smell, and especially taste and perceive. While haute cuisine offers only flavor, Stefan supplies notes: high, medium, deep… his philosophy is the art of penetration. It stitches together Van Gogh, Skryabin, Michelangelo and Nietzsche.

This is why Stefan’s creations will bring joy and excitement to some people, and anger others. Its essence lies in symmetry and asymmetry, and to reach it, Stefan says, you need to put away your knife and fork for a moment. Take a hint from Dada and reject known concepts.

«In the process of doing you make new discoveries. But at the same time you need to be prepared and able to process it. If you don’t understand me,» Stefan Wiesner says, «go listen to Lady Gaga. She sings to match her outfit or look. Everything is interconnected. She sings a painting and creates new imagery.»

Stefan Wiesner binds each menu to an image, and each dish to a totem, perhaps a wolf or cedar, or in this case, to the egregore of the Land Rover. According to Wiesner, each dish must have a totemic essence, and it’s up to the chef to seal it there with a mineral, gemstone oil, slate, granite or rock essence. Cooking for him represents the future of humanity, its savior. Here I sit, drinking coffee with his rock butter, being transported to another dimension. I’d say that a single hour with Stefan Wiesner is more valuable than years of time wasted elsewhere!