What is the best pairing for Armenian wines? None other than Armenia’s national cuisine, or course! Some might go for light snacks like cheese or desserts, while others will prefer the famous Armenian lavash with homemade butter to enjoy the pure taste of Areni. But if you want the ultimate experience, go for fragrant soups and the legendary dolma, which is a must-order if you ever find yourself in a Yerevan restaurant. Why does it have to be the capital of Armenia? I will reply with words of Frunzik Mkrtchan: «Because you people just can’t make dolma!» If you want a taste of real Armenia, you must visit and experience it for yourself. Vasily Prytkov and Tatiana Kotova invite you to a special class on the world of spicy and rich Armenian cuisine.

Armenian cuisine is characterized by its stunning diversity of tastes and aromas. You may be surprised by some of the recipes and their thousand-year histories! Local Armenian culinary traditions date back to ancient times, and it is a known fact that Armenians cooked using fermentation and baking before the modern era. Some rare varieties of wheat have been used since long ago, and the use of grain in general is one of the oldest foundations of this cuisine. But just like cultures and language evolve, national cuisine is now becoming more diverse with the accumulation of experience and adaption of dishes from neighboring cultures to local customs.

Preparations for a meal may take a while since the traditional methods for many Armenian dishes are based on the complex techniques of stuffing and whisking. Locals love using rare combinations of different kinds of meat. For example, one of the oldest Armenian dishes, arganak, mixes chicken and venison (boiled in chicken broth). Another interesting aspect of Armenian cuisine is that different parts of a dish can be cooked separately and married together later.

A typical feature of Armenian cuisine is its high salt content (in hot weather people consume considerably more salt than in moderate climates). On top of that, Armenian dishes are quite spicy. Just like in other Caucasian culinary traditions, Armenians use a wide range of spices, including black pepper, cilantro, mint, tarragon, basil, thyme, garlic, and onion. In sweet dishes they use cinnamon, saffron, cardamom, cloves, and vanilla. A typical Armenian meal starts with an appetizer like aromatic meatballs or cheese. Sometimes you’ll also be offered small pies or a vegetable salad. Pickled peppers are another popular first dish. Armenians use a lot of greens in their cooking, which they eat fresh or add as a finishing touch. On the table you’ll find fresh fruit and vegetables, greens, lavash (the national Armenian bread), and a variety of cheeses and dairy products.

Armenia is also known for its fermented milk products, like matsun, pakhta, and serots (condensed milk). Matsun is a traditional drink made from fermented boiled milk and a special leaven. Matsun can be used to make dough, tan, cottage cheese, butter, sauces, dressings, and condiments. In general, matsun is like a second bread for Armenians, only in liquid form.

Most soups in Armenian cuisine are cooked on a base of sautéed vegetables with added fruit and nuts. They can be either cold or hot and spicy, and are always served with lavash. Khash is the most popular meat soup. It is thick, hearty, and indulgently fatty. Khash is made from lamb/cow knuckles and organ meat. Chulumbur apur is a rice soup with sautéed onion, with a mixture of egg and milk poured in as well. Khashlama is a thick rich soup made from tender pieces of fillet and vegetables. It is one of Armenia’s oldest dishes. Lobakhashu is the local variety of kidney bean soup — delicious, hearty, and made from accessible ingredients like kidney beans, onion, walnuts, and greens.

All dishes, and especially soups, are served with Armenian bread — lavash or matnakash. Armenian unleavened lavash is one of the oldest recipes of bread in the world that has passed through time almost unchanged. Traditional Armenian lavash can be stored for up to several months, although it does gets dry. However, it can be easily returned to its spongy soft texture using steam. And it’s no less delicious than fresh made!

Matnakash («finger-stretched») is a traditional Armenian leavened bread with a hard crust and soft crumb. It is sometimes mistakenly referred to as lavash. For its thick cake-like texture, the baker stretches dough into a circle or oval using their fingers, presses in any type of traditional pattern (again, with their fingers), and then bakes it in a tandyr. The second courses are complex, and require the long and multi-staged preparation of meat. Armenian cooks traditionally use mutton, beef, chicken and turkey, and more rarely pork. Meat is often worked over in three different ways — roasting, baking, or braising.

Tolma, or dolma («tol» means vine, grape leaf) is probably the most famous Armenian dish in all post-Soviet countries. The first versions of tolma have been around in Armenia for as long as vinegrowing and husbandry exist. In its most widespread instantiation, it’s made of chopped mutton with rice, greens, and pepper wrapped in a grape leaf. It is one of the most popular dishes in Armenia. There is also pasuts tolma — a Lenten version of the dish often eaten during religious fasts. It is made from cabbage and other vegetables stuffed with a mix of beans and grains, also wrapped in grape leaves.

Khorovats is shashlik made with large chucks of meat, most often pork, and sometimes mutton or beef. Kufta (kololak) are Armenian meatballs made from specially tenderized and boiled meat. Sometimes it is served in broth. Bozbash is boiled mutton with pea and greens. Arisa is a porridge-like dish from chicken and wheat. Khashlama, made from bonfire-cooked mutton, is an easy to cook and delicious dish that can be eaten as either a soup or second course.

Armenians have their own variation of pelmeni called boraki. These little guys are cylinder-shaped, open on one side, and the minced meat used for stuffing is slightly roasted beforehand. Armenians do not boil them, but instead simmer them a bit and then pan fry until the crust is golden. Vegetables and greens (large leaves) are then braised, minced, and turned into a paste. Armenians love nuts, peas, lentils (well, beans in general), rice, wheat, and spelt. Grains are cooked with clarified butter and greens. If you have a soft spot for vegetables, definitely give the local eggplants stuffed with peas and cheese a chance.

Khapama is pumpkin stuffed with sweetened pilaf. In the past, khapama used to be a wedding dish, and served as a symbol of abundance. The stuffing may contain dried fruit and honey, nuts and spices.

All eggplant and most vegetable dishes are dressed with matsun mixed with chopped garlic. Other sauces play a very important role in Armenian cuisine as well. These include tomato, pepper sauces and tahena as well — a sauce made from crushed sesame seeds. Sauces are most often served hot, not cold. They are used during cooking or added to soups and stews later. 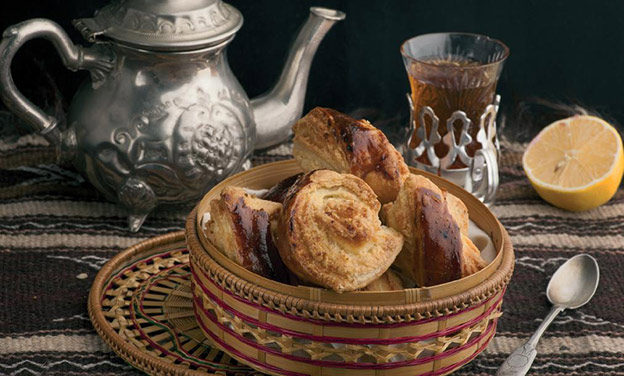 Armenians love their desserts. Gata (yata) is one of the most popular local offerings. They are sweet, round puff pastry rolls filled with fried flour-based stuffing. There are a dozen different types of gata, made with either sponge dough or straight dough. Every cook has their own favorite stuffing, which can even include cottage cheese or dried fruit.

Pakhlava is a well-known pastry with a nut and honey stuffing. Alani is made from dried peaches filled with a sweet nut paste. Armenian cuisine uses a wide range of jams, including apricot, mulberry, walnut, and even rose petal jam. 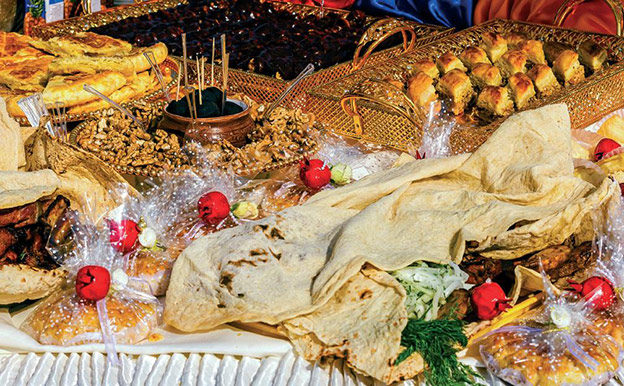 Aged Armenian cognacs are equally as stunning as their counterpart Armenian wines. Everyday meals might also be accompanied by a mulberry vodka artsakh (arakh), which is a strong spirit infused with white mulberries. Artsakh is distilled in a small copper pot that imbues it with a special aroma. But the most amazing of all local drinks are young artsakhs, made from autochthonous Armenian white grapes, specially harvested from the oldest and strongest vines. These are a unique array of drinks with overwhelming depth and delicacy, and 50% alcohol content.

Among softer drinks we can mention doshab, a fragrant cherry-colored syrup made from red grape.

After a hearty meal, Armenians like to drink surch, coffee made in a cezve on hot sand. They also enjoy matsoni and mineral water.

Tea is not very popular in Armenia. Standard black and green tea are served only at official meals. At home, Armenians drink herbal infusions from thyme, Saint-John’s-wort, mint, and fruit.