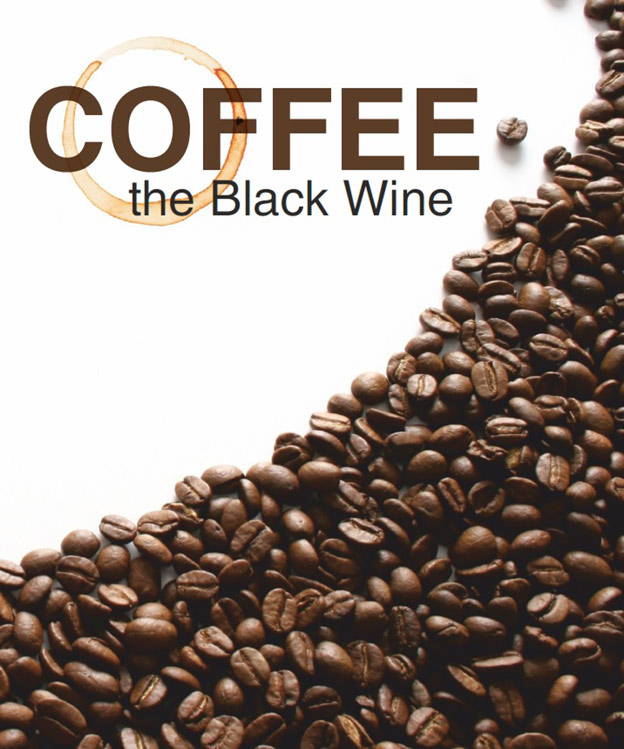 These were ranged round, each in its crystal ewer,

And fruits, and date-bread loaves closed the repast,

And Mocha’s berry, from Arabia pure,

In small fine China cups, came in at last.

One cup of strong, steaming hot black coffee, three tablespoons of whipped cream, one shot of Irish whiskey… There’s nothing truly remarkable in this recipe. Today, coffee is cultivated in more than fifty countries around the world, and many of them have their own traditions for drinking it. Although coffee is considered one of the world’s most popular drinks, its true value and qualities remain a mystery for many consumers. Arabs claim that coffee has a certain power or energy, which they’ve termed «qawha.» 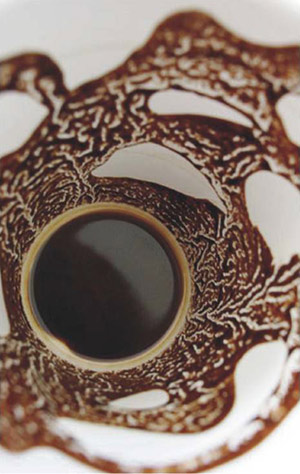 Coffee has a strong connection with the Moon, it doesn’t like the sun! It also takes a very special place in Celtic traditions and their attitudes to life. For this amazing people, the questions of «why» and «how» have always been more important than «where» and «when.» When it comes to druids, their main ritual is indeed the rite of initiation connected with the Moon. The rite of brewing a special beverage containing moon power was called «Obtaining the power of Cú Chulainn,» the hero of Celtic legends. This beverage is known in different parts of the globe under the names soma, genada, haoama or ambrosia. All these drinks are used for divinations (remember the coffee grounds!), including Red Claret, which is associated with the mystical aspects of winemaking.

The background here is also related to the omni-creating Chalice, which grants it its special conditions and quality. And any beverage that grants this same special quality is essentially connected to the Chalice — a unique symbol in world culture. The wisdom of this chalice was an important element in Celtic culture, meaning that any drink is good as long as it can be experienced. Any wholesome drink has its own principles and laws, and coffee is no exception.

If we assume that history is influenced by certain people and in certain moments, we’ll never find out where coffee appeared, even if we consult the Coptic version that mentions the Southern Ethiopian province of Kaffa. In any event, in the beginning nobody ever brewed coffee in coffee machines — coffee was either food or drink. In ancient times, when food was attributed with a divine nature, coffee represented the region where it was born, making it a totemic drink. Its totemic nature is determined by the energy level of the local area, so consequently coffee is something to be savored, not quaffed.

Savoring is a sacred process, which gave birth to the initial divine symbols for humans. This act combines the physical, energy and intellectual natures of a person, and can be manifested through both form and content. In this case, coffee represents the content of an act. Yet content cannot be understood without a form. 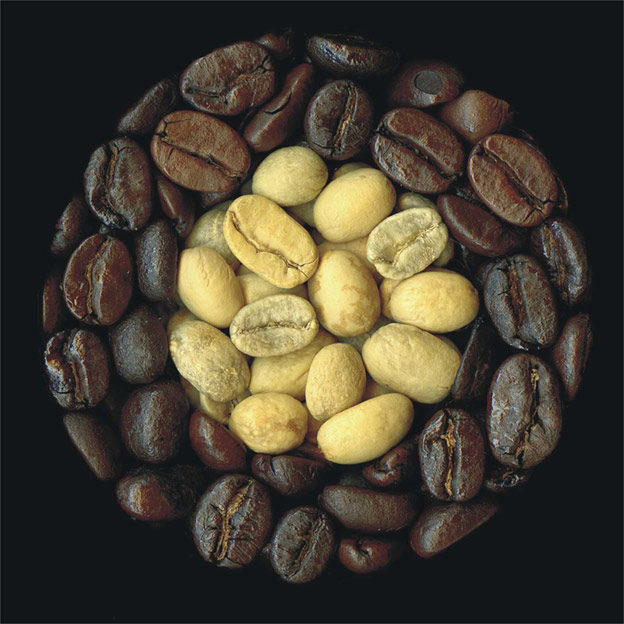 The initial forms that drew people’s attention were those that gave life and accumulated energy, including grapes, grains, coffee, tea, corn, etc. These are symbols of food associated with the mother goddess and fertility. All jars, vessels, chalices and goblets united under the symbols of the horn of abundance, the omni-creating cauldron, have always been made to hold these products. If we turn to the beliefs of the Amhara and Tigreans (the tribes that probably introduced this drink to humankind), we can see they saw in it a connection between nature and man. 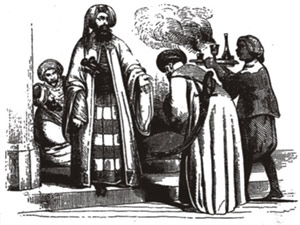 Their Christian monophysite confession does not allow for any duality in either thought or behavior, which means that the coffee drink they brewed and harvested like wine was far from today’s modernized beverage. Nevertheless, they cherished and used it because of the way they understood it.

That’s why all ancient cultures with their own cosmogonic myth used cauldrons and vessels to brew and store liquids and food, and also make the magic beverages of ale, beer, wine, coffee and tea. People drank from cauldrons and used them as decorations. Among the ancient cultures of the Celts, Thracians and Greeks, the magic cauldron was a symbol of both abundance and immortality.

In the sagas of Ireland, the cauldron was also a symbol of knowledge and inspiration for the Celts. If we instead turn to the pagan goddesses — Egyptian Isis, Celtic Danu, Phrygian Cybele — who were guardians of knowledge about proportion and the birth of new life, we’ll see that their stories were always connected to the magic cauldron, where they would brew certain beverages.

In fact, we can also incorporate the Golden Fleece of Greece, the Russian magic tablecloth, Phrygian rhyton, Holy Grail, the Arabian cezve and other symbols in the concept of the cauldron, including alchemy cauldrons, which were used to create the philosopher’s stone. All of these symbols embrace the idea of changing one object into another, something resembling ambrosia, a food that grants youth and immortality. Understanding proportions and the rhythm of eating is part of the art of taste, or the alchemy of taste investigated by the Arabs and, undoubtedly, perfected by them.

In a search for the origin of coffee, we might try to go south, north, west or east, but this is not our task. Here, it is knowledge that matters. If we accept the theory that coffee came to the Arabian Peninsula thanks to the famous Sufi Ali-ben-Omar al-Shadhili, it is quite obvious that he was knowledgeable of its secrets. 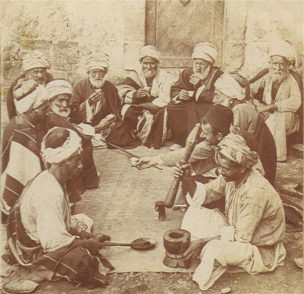 It is quite possible that the temple Moca (al-Muha) founded by him became the first laboratory where Arabs studied the qualities of coffee beyond its usual religious purposes. The Sufi never do anything without proper research first. This is even true for water, not to mention coffee!

In ancient times, people nourished their bodies not with food, but drink. The former was reserved for the spirit. Therefore, its qualities were discovered through food, and likewise how humankind learned to nurture its spirit. The purpose of this nutrition was to transform the spirit. Later it was replaced by the notion of wine, which back then included many drinks, not just those made from grapes. The theory that it was the Arabs who discovered coffee is based on the fact that the Arabs first learned to brew coffee, thus bringing it to perfection.

There is indeed an interesting connection between coffee and Sabr, another monastery. The Sufi understood the term «sabr» as patience and learning, or the ability to accept and like bitter tastes. Does this not resemble the taste of coffee? Brewed bitter coffee was the most valuable for the Sufis, and this infusion had the same name as the Elixir of Qawha, or the Elixir that helped the prophet Muhammad restore his heart after stress. According to legend, Allah himself saved the prophet by sending him the archangel Jibra’il with a bitter beverage, black as the stone of the Kaaba.

The taste and flavor of that beverage invigorated the prophet and gave him strength. These properties of coffee are reflected in the notion of «qawha.» That’s how this drink, a beverage that restores the spirit, made from coffee became the substitute for wine among Arabs. Some people compare the process of brewing and drinking qawha to the rhythm of reading suras. 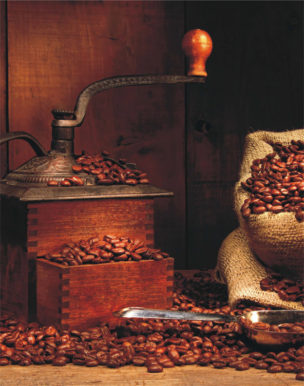 Still, even though we claim that the Arabs invented coffee, we cannot forget about the religious Ethiopians, who determined the important place of this drink in everyday life. The monks of the Coptic monastery Kaafa, whose only desire was to serve God, led an extremely ascetic life without any distractions, not even for meals. To sustain themselves, they brewed an infusion from the black beans of «cava,» which appeared in the monastery as if by miracle. As legend has it, it was the hand of God Himself, and these beans later became known as coffee. In other words, coffee, which the Ethiopians considered black wine, was a divine gift for them.

In the history of coffee, the Ethiopian version is among the most foundational theories, making it impossible to avoid. It is also the most mysterious and esoteric versions, because according to it coffee can appear anywhere by the will of God, which is also an element of the Arabian theory.

If we try, we can also see a dual model of the world, resembling a coffee bean, in the records and images of the ascetics, Hittites and Celts. Coffee represents the duality of the world through the prism of the lunar cult, which does not need the sun, but instead only the moon and Earth. Since coffee shrubs have roots that grow 2 to 3 meters long, they can absorb more micro-elements, minerals and underground water from the soil. This means that coffee can be filled with the power of the place where it grows. The period of ripening for the two main varieties of Arabica is 8 months, and for Robusta 9-11 months, which is curiously similar to the period of the development of an embryo in a mother’s womb. And let’s not forget that some modern Arabica that ripens in 5-6 months is very different from the variety with a longer maturation period, and the same is true for Robusta, which does not ripen faster than in 9-9.5 months. It is interesting to note that during this period of time, coffee beans change their color 7 times: from green through yellow and red to brown. So it is possible to conjecture that Ethiopians viewed coffee as a substance that reflected the pulse of life and the representation of the human spirit. 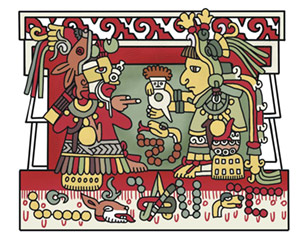 So, is drinking coffee healthy or not? The answer is simple — it is, by all means, unhealthy. Drinking coffee is unheard of. Coffee instead must be savored. To do this, one needs both high-quality coffee and the knowledge of how to enjoy its taste. The rest is optional. If a person wants their coffee to be healthy, they must learn about the aesthetics of this product; only then can they experience its ecstatics.

Before people learned to brew coffee, it was merely a harsh broth made from raw beans and fruit. It wasn’t until the 13th century, when they started to dry it, and only after then did they learn to roast. It was back then when people noticed its beneficial qualities. When we talk about the benefits of coffee, we have to first learn about its general qualities, no matter if we drink Jamaican Blue Mountain or Indonesian Kopi Luwak.

The most important and difficult thing is the ability of our body to absorb proteins from coffee. Since coffee has a very strong effect on the human body, one must learn the qualities of coffee, the variety that suits each person best and, of course, learn about coffee brands. Many things depend on the digestive system. Coffee has to be fermented and absorbed, first of all, through the organs of digestion. Otherwise, it places a burden on the nervous system and heart.

Famous Sufi healers Muhammad ibn Zakariya al-Razi (850-922) and ibn Sina (980–1037) used coffee as a medicine. From their works, we learn that coffee can help treat colds and rashes, strengthens bones, and prevents the formation of kidney stones, gout and smallpox. Women can also drink coffee to regulate their menstrual cycle. This list, which is far from exhaustive, is referenced by numerous researchers and their works. Coffee prevents dental caries by killing the bacteria that causes it, streptococcus mutans. It also slightly stains the teeth and makes them more yellow, but likewise strengthens enamel. Most importantly, coffee improves liver function. And our ancestors believed the liver was the vessel of the spirit!

But we must always bear in mind the differences in the physiology of today’s humans and those who lived hundreds of years ago. It cannot be forgotten that coffee is beneficial to human health only in certain conditions, when consumed in moderation and brewed correctly.