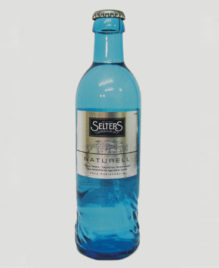 Selters is a natural table mineral water with mild, natural carbonation. The spring is located in the central part of Germany, near the community of Löhnberg in the town of Selters, down the river Lahn on the right tributary of the Rhine. This picturesque area with its valleys and meadows is tucked in the Hesse lands formed by the Rhenish Slate Mountains. These mountains consist primarily of clay slates, quartz, sandstone and limestone, but some basaltic rocks exist there as well. The Mountains are cut through with numerous rifts, from which many mineral springs flow out on the southern slopes.

The exact age of the spring in unknown, but it generally thought to be around 8 to 12 thousand years old. The first written evidence of its existence dates back to the 16th century. In 1581, Jacobus Theodorus, a doctor of the town of Worms (West Germany) in his work «Neuw Wasserschatz» («Water Treasure») dedicated 10 pages to the Selters spring. This description spread the fame of the spring around Europe and provided the stimulus to found a resort around it.

Starting from the middle of the 18th century, Selters began its spread all around the world. Bottled in sealed clay jars, this water was delivered to Scandinavia, Russia, Africa, and even Indonesia. In 1791, exports of the water reached a million jars, bringing in more than fifty thousand reichstalers in net profit to the budget of the region. Up to the revolution of 1905, almost all pharmacies in Russia used this water. People called this water «zelterskaya» («from Selters») in their everyday lives, and it often appears in Russian and Soviet literature under this name.

The environmentally clean Selters mineral water is rich in minerals and good for the human body. The minerality level of this water is rather high at 1.57 g/l. The sodium content in this water activates ferments, supports muscular tone and maintains the balance of acids and alkali in the body. Chloride and bicarbonate form an optimal balance between acids and salts in the stomach, while calcium and magnesium strengthen teeth and bones. Selters water soothes the nervous system, sustains the cardiovascular system, raises the amount of hemoglobin in blood, regulates the balance of electrolytes, and prevents calcium from passing from the bones into the muscles even during the most intense physical work.

German and Russian scientists recommend drinking this water daily, and also as a preventive measure against diseases and to restore the vital functions of the body.