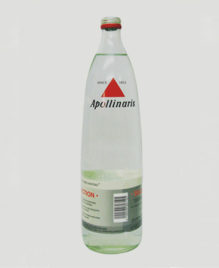 Apollinaris is a natural table mineral water with mild, natural carbonation. The spring is located in Germany, in the valley of the Ahr river, one of the most picturesque areas near the Rhine at the foot of the Eifel Mountains. The Bad Neuenahr-Ahrweiler spa town also calls this place home. The resort was founded in 1858, and since then these curative springs have been attracting visitors from all over the world. Apart from its mineral water, this region is also famous for its longstanding wine-making traditions, and visitors can even take tours of the local wineries.

The Romans discovered the ancient spring of Apollinaris almost two thousand years ago, but it only received its modern name in the middle of the 1800s when wine-maker Georg Kreuzberg discovered a clean, warm mineral spring in his vineyard. He named it after the main saint of this valley, St Apollinaris of Ravenna, and a church located nearby was named after him as well. Thousands of pilgrims visit this church every year on July 22, the Day of St Apollinaris. The saint’s relics still kept here are considered to have healing powers.

In 1853, they started to bottle water from the spring for sale. In 1892 in London, Apollinaris mineral water was named «The Queen of Table Waters» and awarded with the red triangle, a symbol of quality. After this honor, it became a frequent beverage in both Buckingham Palace and the White House.

The spring is situated in an area of different layers of volcanic rock, where natural carbon dioxide is saturated with minerals and microelements, enriching the water. These conditions, formed by the nature of the Eifel Mountains itself, define the extremely high level of purity of Apollinaris water and its high mineral content.

However, it is more than just water, it is a beverage in and of itself. It does not merely quench thirst, but rather restores the body’s vital strengths. This water is balanced and well-structured, and the minerals it contains are easily digested by the human body. It is a great cure for hangovers, and can also compensate for the lack of potassium and magnesium in people who eat a lot of fast food or who start dieting without a doctor’s recommendation. It also aids weight loss.